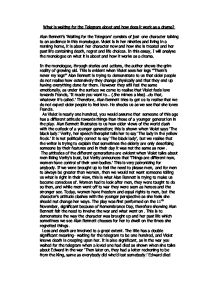 What is waiting for the Telegram about and how does it work as a drama?

What is waiting for the Telegram about and how does it work as a drama? Alan Bennett's 'Waiting for the Telegram' consists of just one character talking to an audience in this monologue. Violet is in her nineties and living in a nursing home, it is about her character now and how she is treated and her past life containing death, regret and life choices. In this essay, I will analyse the monologue on what it is about and how it works as a drama. In the monologue, through stories and actions, the author shows the grim reality of growing old. This is evident when Violet sees her legs '"Them's never my legs"' Alan Bennett is trying to demonstrate to us that older people do not realise how extensively they change physically and that they end up having everything done for them. However they still feel the same emotionally, as under the surface we come to realise that Violet feels love towards Francis, 'It made you want to... (She mimes a kiss)...do that, whatever it's called.' Therefore, Alan Bennett tries to get us to realise that we do not expect older people to feel love. ...read more.

He writes about how death can affect us all whatever age we are. In the 'rest home', the aged are treated with little respect, this is revealed in Violet's reaction when she realises Francis was gay 'She said, "It wasn't lasses; it was lads." I said, I knew it was lads. She said, "Well I wish you'd told me." Right nasty.' The writer is trying to show us that elderly should be treated with respect- through the way Violet receives the comment from Devon. We see she was hurt and that even the smallest comment can make anybody sensitive. What's more, human freedom is taken away in the 'rest home', like they have to share clothes '"...And this frock isn't mine. Tangerine doesn't suit me."' Violet's daily routine consisted of sitting, sleeping and occasionally she had someone to talk to, she says 'Pets is what they want in this place' this is presenting that people do not actually want to talk to those living in the rest home, they just want something that is easy to look after. Violet's lifestyle is shown in the performance by a realistic setting, it being just a small confined space with a bed and four walls. ...read more.

She said, "Armley." I said, "Armley where?" She said, "My mam and dad's in 1947." We realise that Rene wants to leave, and by the end her taxi came and took her. On television it can fade, this is dramatic and shows the days passing and death slowly creeping upon her. A face is one of the strongest emotional elements, it can show you anything and Violet's face constantly has emotion upon it. Dramatic devices are used like piano music and fading to show the days are passing by and each day there seems to be another story to tell us. The monologue consisted of emotion and in my opinion worked well as a drama; we can see the emotion through facial expressions and actions. Alan Bennett develops Violet as an elderly woman whose life comes across due to Violet individually speaking, nobody is made to correct her or interrupt her. We can see clearly what the monologue is about because the writer makes Violet realistic and paints an image. 'Waiting for the Telegram' is about an elderly woman's world and how the character feels about death, love, regret and old age. Alan Bennett taught me through his writing that this generation do not respect the older generations as much as they should because they still hold exactly the same feelings as us. ...read more.