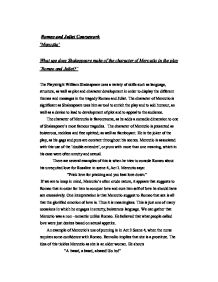 What use does Shakespeare make of the character of Mercutio in the play Romeo and Juliet.(TM)

His speech on Queen Mab in Act 1, Scene 4 is loaded with imagery and symbolisms. Queen Mab is a fairy who rides around on her carriage in the night, putting dreams in sleepers. It starts of, first of all like a flight of fancy. The speech is very imaginative and goes into intricate details, like the fact that her "chariot was an empty hazel nut shell" with spokes "made of long spinners' legs" which was driven by a "small grey-coated gnat." As Mercutio continues his speech, he becomes more engaged in it, going into more detail, and talking of dreams. Towards the end of his speech bitter undertones are cast at which point Romeo stops him, and calms him down. For example, Mercutio describes in great detail how Queen Mab travels over the minds of those lost in sleep. Mercutio says " she gallops...through lovers brains and then they dream of love....' This conveys the image of Queen Mab being charming and enchanting and a bringer of good dreams. Mercutio, further describes how Queen Mab travels "O'er ladies lips, who straight on kisses dream.'' This quotation has connotations of love and romance, thus linking Queen Mab to love and romance. ...read more.

This knowledge, could have spared Mercutio his life, and not led to the banishment of Romeo and his and Juliet's ultimate death. This makes Mercutio's death more moving. His death, halfway through the play, ensures that he is also used as a plot device, to trigger the murder of Tybalt, by Romeo and creating a further knock on effect, leading to the eventual deaths of Romeo and Juliet. Mercutio also adds the element of entertainment and laughter to the play, making it enjoyable for the audience. To conclude, If we examine Shakespeare's play of 'Romeo and Juliet', we notice that the character of Mercutio in the play holds many uses. Mercutio is primarily regarded and the comedic role, he entertains the audience and is a relatable character. Mercutio is also character who creates a dynamic with the main character Romeo, and enables us to explore his relationship with him, away from Juliet. Mercutio is also a clear plot device, and his influence in Romeo's life lead to the meeting between him and Juliet; adversely, in the same way his death can be seen as the trigger that lead to the death of the 'Star crossed lovers.' Overall, it clear that Mercutio is an overall enrischment to the play of 'Romeo and Juliet.' ...read more.