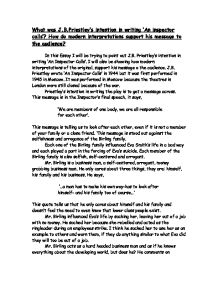 What was J.B.Priestley's intention in writing 'An inspector calls'? How do modern interpretations support his message to the audience?

What was J.B.Priestley's intention in writing 'An inspector calls'? How do modern interpretations support his message to the audience? In this Essay I will be trying to point out J.B. Priestley's intention in writing 'An Inspector Calls'. I will also be showing how modern interpretations of the original, support his message o the audience. J.B. Priestley wrote 'An Inspector Calls' in 1944 but it was first performed in 1945 in Moscow. It was performed in Moscow because the theatres in London were still closed because of the war. Priestley's intention in writing the play is to get a message across. This message is in the Inspector's final speech, it says, 'We are members of one body, we are all responsible for each other'. This message is telling us to look after each other, even if it is not a member of your family or a close friend. This message is stood out against the selfishness and arrogance of the Birling family. Each one of the Birling family influenced Eva Smith's life in a bad way and each played a part in the forcing of Eva's suicide. ...read more.

A couple of days into its voyage, it sinks. It is comments like these that show weaknesses in Birling's knowledge of business. Sheila Birling is a spoilt daughter of Mr and Mrs. Birling. She comes across to me as a stubborn character, se says, 'I went to the manager of Milwards and told him that if they didn't get rid of the girl, I'd never go near the place again, and I'd get mother to close our account with them' This shows to me that as Sheila is of a high status, she intends to abuse this power to get what she wants. In the quote, it says to me that she is obviously intent on getting the girl sacked and eventually does so. Gerald croft is recently marrying into the family through Sheila, and also has a hard headed business man as a father. The main intention in writing 'An Inspector Calls' is the message I stated in the introduction. It is to encourage people to look out for each other, no matter what social class or the power that you hold, and not to abuse power if you have it. ...read more.

This version I produced by Stephen Daldry and is a modernised version using special FX. First of the min special effects is the way in which the Birling's house is on stilts to emphasise how higher in the class system they are than everyone around them. Edna, the maid is only allowed o be on the lower level of the house and not any higher due to her class. The Birling's are living in an unreal, far from reality world. This is made clear by their house to show that they are far from reality. The inspector enters the stage through the audience to give the impression that he is going to be representing them during the events on the stage. Rain is falling in the theatre and this represents tears, purifying and cleansing. The lighting is an essential part of the mood making. It is 'pink' and intimate as opposed to when the inspector comes in and then the lighting changes to a brighter, harder, more realistic mood. This play is very moral and teaches anyone about the importance of having equality and love between people of different classes, I think the inspector plays the most important part in the teaching of this lesson. ...read more.

This essay doesn't really hang together as a fluent response. It is an interesting question but it needs addressing in a more fluid style with further specific textual or production support.