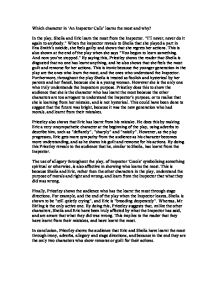 Which character learns the most in &quot;An Inspector Calls&quot; and why?

Which character in 'An Inspector Calls' learns the most and why? In the play, Sheila and Eric learn the most from the Inspector. "I'll never, never do it again to anybody." When the inspector reveals to Sheila that she played a part in Eva Smith's suicide, she feels guilty and shows that she regrets her actions. This is also shown at the end of the play when she says "You begun to learn something. And now you've stopped." By saying this, Priestley shows the reader that Sheila is disgusted that no one has learnt anything, and he also shows that she feels the most guilt and remorse for her actions. ...read more.

This could have been done to suggest that the future was bright, because it was the new generation who had morals, and learnt from their mistakes. Priestley also shows that Eric has learnt from his mistake. He does this by making Eric a very unsympathetic character at the beginning of the play, using adverbs to describe him, such as "defiantly", "sharply" and "noisily". However, as the play progresses, Eric gets more sympathy from the audience as his character becomes more understanding, and as he shows his guilt and remorse for his actions. By doing this Priestley reveals to the audience that he, similar to Sheila, has learnt from the Inspector. ...read more.

Finally, Priestley shows the audience who has the learnt the most through stage directions. For example, and the end of the play when the Inspector leaves, Sheila is shown to be "still quietly crying", and Eric is "brooding desperately". Whereas, Mr Birling is the only active one. By doing this, Priestley suggests that, unlike the other characters, Sheila and Eric have been truly affected by what the Inspector has said, and are aware that what they did was wrong. This implies to the reader that they have learnt from their mistakes, and have learnt the most. In conclusion, Priestley shows the audience that Eric and Sheila have learnt the most through irony, adverbs, allegory and stage directions, and because in the end they are the only two characters who show remorse or guilt for their actions. ...read more.