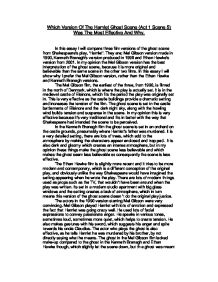 Which Version Of The Hamlet Ghost Scene (Act 1 Scene 5) Was The Most Effective And Why.

Which Version Of The Hamlet Ghost Scene (Act 1 Scene 5) Was The Most Effective And Why. In this essay I will compare three film versions of the ghost scene from Shakespeare's play, 'Hamlet'. They are; Mel Gibson version made in 1990, Kenneth Branagh's version produced in 1996 and Ethan Hawke's version from 2001. In my opinion the Mel Gibson version has the best interpretation of the ghost scene, because it is more original and believable than the same scene in the other two films. In this essay I will show why I prefer the Mel Gibson version, rather than the Ethan Hawke and Kenneth Branagh versions. The Mel Gibson film, the earliest of the three, from 1990, is filmed in the north of Denmark, which is where the play is actually set. It is in the medieval castle of Elsinore, which fits the period the play was originally set in. This is very effective as the castle buildings provide a dramatic setting and increases the tension of the film. The ghost scene is set in the castle battlements of Ellsinore and the dark night sky, along with the howling wind builds tension and suspense in the scene. In my opinion this is very effective because it's very traditional and fits in better with the way that Shakespeare had intended the scene to be perceived. ...read more.

The actor who plays the ghost uses facial expressions to add to the atmosphere. He appears with his eyes glazed over, and he looks white and pale, which is was very effective in making the ghost appear dead. The acting in the Ethan Hawke version of Hamlet is not as plausible as in the other two films. The actors appear wooden, and there is a lack of emotion in the way both Hamlet and the Ghost speak. Overall the scene is less effective; there is no real atmosphere created by the actors and it is very tame. The costumes in the Mel Gibson film were very traditional and old fashioned which fitted in with the setting and the period the film was first set in. they were very dark which added to the mood of the scene. As in all the films the costume doesn't really make the scene any more effective, they are just elements needed in the scene, which aren't crucially important. The make up of the ghost helps to make him look normal, not as a ghost or spirit, like in the other films. The costumes in the ghost scene of the Kenneth Branagh were also very traditional, much the same as the costumes in the Mel Gibson film, as they were both set in the same period. ...read more.

In the Kenneth Branagh film, tension is built up by making the ghost of Hamlet's father appear from the shaking ground, and there is a good use of special effects to build up the atmosphere, which makes the audience wonder what will happen next. Scenes in the orchard building after also help to build up the tension as Hamlet realises what's happened. In the Ethan Hawke film, the latest of the three, from 2001, atmosphere and tension isn't built up very well, if at all. The setting and characters vary so much from the original script that the scene isn't as good as the other two. The lack of emotion fails to create any real tension and atmosphere in my opinion. After evaluating the three films, I stuck by my decision that the Mel Gibson version, from 1990, was a better production of Shakespeare's Hamlet, than the versions with Kenneth Branagh in (1996) and Ethan Hawke (2001). I think this because it proved to be the more original film, and the other two films were weaker and not as good as the Mel Gibson version, when comparing different aspects of the films. The Mel Gibson film had a setting, which fitted in better with the one from the original play, the acting was more believable and the costumes and make up represented the characters emotions. The lighting wasn't as good as that of the Kenneth Branagh version, but overall I believe it was the better film at creating atmosphere and tension and therefore it was more effective. ...read more.