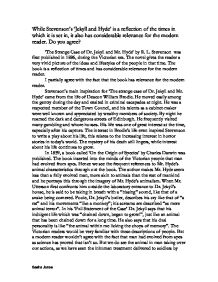 While Stevensons Jekyll and Hyde is a reflection of the times in which it is set in, it also has considerable relevance for the modern reader. Do you agree?

While Stevenson's 'Jekyll and Hyde' is a reflection of the times in which it is set in, it also has considerable relevance for the modern reader. Do you agree? 'The Strange Case of Dr. Jekyll and Mr. Hyde' by R. L. Stevenson was first published in 1886, during the Victorian era. The novel gives the reader a very vivid picture of the ideas and lifestyles of the people in that time. The book is a reflection of times and has considerable relevance for the modern reader. I partially agree with the fact that the book has relevance for the modern reader. Stevenson's main inspiration for 'The strange case of Dr. Jekyll and Mr. Hyde' came from the life of Deacon William Brodie. He moved easily among the gentry during the day and exalted in criminal escapades at night. He was a respected member of the Town Council, and his talents as a cabinet-maker were well known and appreciated by wealthy members of society. By night he roamed the dark and dangerous streets of Edinburgh. He frequently visited many gambling and whore houses. His life was one of great interest at the time, especially after his capture. The interest in Brodie's life even inspired Stevenson to write a play about his life, this relates to the increasing interest in horror stories in today's world. ...read more.

This theme is mainly seen in the characters of Dr. Jekyll and Mr. Hyde, Dr. Jekyll's public image was one of "a respected physician and chemist", someone who was respected by everyone he came in contact with. He was born into a prosperous family and hence had a good education. He would also be a man of high civility and with good taste. If Dr. Jekyll was to unleash his evil side, people would have been taken aback with his behaviour, as there was a certain degree of behaviour that had to be maintained among high ranking members of society, like himself. In order to avoid this marring, he created Mr. Hyde. When unleashed Mr. Hyde committed some very evil crimes. The author gives us details of only two of these incidents. The first, where he trampled over a little girl for no reason and walked away. Leaving her wounded and helpless on the street. The second, the murder of Sir Danvers Carew. The theme of duality in a persons character, is universal. People are always trying to hide their true selves out of fear that they may not get accepted into society, because peoples individuality isn't respected. People are expected to be just like someone else. ...read more.

Hyde at any time". In reality if the compulsion isn't stopped as soon as it is started it begins to control the addicts life, and from then on there's no going back. With the stresses of living in today's modern world an addict will be able to relate to Dr. Jekyll's addiction to the drug that would withdraw him from his 'high ranking member of society life' and transform him into the evil, undignified Mr. Edward Hyde. The book has contributed to modern psychology theories. Terms in modern psychology now consist of 'The Jekyll and Hyde personality'. In my opinion Stevenson was undoubtedly aware that these issues were ones which many ordinary people of that time were thinking about. Most of the ideas have carried on through the centuries, though some have changed; for example the attitude towards the woman's place in society and the origin of mankind. Some social ideas will carry on through the centuries to come like, suppression leading to violence, the acts of hypocrisy that we are all guilty off, the increasing interest in chemicals and the anatomy and the undeniable fact that we all have an evil side to our nature and it accounts for only a small portion of our personality. Hence I hold a balanced view. ?? ?? ?? ?? Sasha Jones ...read more.