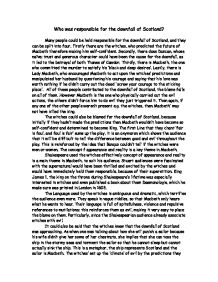 Who was responsible for the downfall of Scotland?

Who was responsible for the downfall of Scotland? Many people could be held responsible for the downfall of Scotland, and they can be split into four. Firstly there are the witches, who predicted the future of Macbeth therefore making him self-confident. Secondly, there does Duncan, whose na�ve; trust and generous character could have been the cause for the downfall, as it led to the betrayal of both Thanes of Cawdor. Thirdly, there is Macbeth, the one who committed the murder to satisfy his 'black and deep desires'. Lastly, there is Lady Macbeth, who encouraged Macbeth to act upon the witches' predictions and manipulated her husband by questioning his courage and saying that his love was worth nothing if he didn't carry out the deed 'screw your courage to the sticking place'. All of these people contributed to the downfall of Scotland, the blame falls on all of them. However Macbeth is the one who physically carried out the evil actions, the others didn't force him to do evil they just triggered it. Then again, if any one of the other people weren't present e.g. the witches, then Macbeth' may not have killed the king. The witches could also be blamed for the downfall of Scotland, because initially if they hadn't made the predictions then Macbeth wouldn't have become so self-confident and determined to become King. The first Line that they chant 'fair is foul, and foul is fair' sums up the play, it is an oxymoron which shows the audience that it will be difficult to tell the difference between good and evil throughout the play. ...read more.

This is ironic because in reality a seed of ambition is growing in Macbeth, which will lead to him murdering the King. Furthermore the blame could also fall on Macbeth, whose greed, ambition and over confidence led to him changing from the 'Noble Macbeth' he was at the beginning to the 'b****y tyrant' and 'Dead butcher' he became at the end. He was apprehensive and suspicious of people whom he should have trusted e.g. Banquo and too trusting and dependant on people whom he should have doubted and suspected i.e. the witches who meddle with fate and destiny. Since Macbeth was a tragic hero, he initially recognized that the 'weird sisters' represent evil so he didn't consider their predictions seriously and the audience perceived him as good. However, when he found out that two of the predictions they made were true, he began to think they were good, but his heart told him otherwise as he says, they ' make my seated heart knock at my ribs/Against the use of nature'. Therefore, Macbeth had felt doubt and uncertainty when he thought of the witches but acted against his better judgement and let his greed and desire to be King lead the rest of his actions. The Witches gave Macbeth a new way of thinking; suddenly he began to believe that he could be King 'if chance will have me King, Why chance may crown me'. By this, he seems to have drawn a parallel between fate and the supernatural but afterwards he takes fate into his own hands when he kills the King, the guards, Banquo, Mcduff's children and wife. ...read more.

Lady Macbeth could have let her desire to become queen cloud her judgement. However we are shown again and again that she isn't evil but rather a victim of it. She is shown to be unable to cope with the actions that herself and her husband have undertaken 'Will all great Neptune's ocean was this blood Clean from my hand?' it shows that she regrets her actions and in the end commits suicide, which unfortunately means (traditionally) that her soul is destined to roam in purgatory for all eternity. Even Macbeth regretted his actions but his way of dealing with it was by killing several other people. To conclude, I believe that Lady Macbeth, the witches and Duncan were all factors that led to Scotland downfall, but the main cause was Macbeth's greed, ambition and overconfidence. At the beginning he was slightly influenced by Lady Macbeth in his decision to kill the King but by the end, he has ordered the deaths of his best friend Banquo and Macduffs family all on his own. His wife once his 'dearest partner of greatness' is now not of importance when his hold on the throne is in question. In my opinion he was the one that linked the witches' predictions with murder, he was the one who killed Duncan and he was the one responsible for Scotland's downfall. However, I think that Duncan hold s some of the blame as well because the chaos that Macbeth brought to the country only built on the Turmoil it was already in because of the war. If Duncan hadn't been such a weak leader and more wary of people then Macbeth may not have succeeded in committing the murder. ...read more.