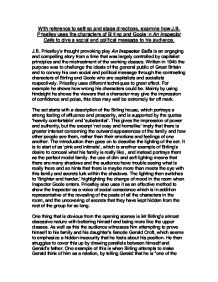 With reference to setting and stage directions, examine how J.B. Priestley uses the characters of Birling and Goole in An Inspector Calls to give a social and political message to his audience.

With reference to setting and stage directions, examine how J.B. Priestley uses the characters of Birling and Goole in An Inspector Calls to give a social and political message to his audience. J.B. Priestley's thought provoking play An Inspector Calls is an engaging and compelling story from a time that was largely controlled by capitalist principles and the mistreatment of the working classes. Written in 1945 the purpose was to challenge the ideals of the general public of Great Britain and to convey his own social and political message through the contrasting characters of Birling and Goole who are capitalists and socialists respectively. Priestley uses different techniques to great effect. For example he shows how wrong his characters could be. Mainly by using hindsight he shows the viewers that a character may give the impression of confidence and poise, this idea may well be extremely far off mark. The act starts with a description of the Birling house, which portrays a strong feeling of affluence and prosperity, and is supported by the quotes 'heavily comfortable' and 'substantial'. This gives the impression of power and authority, but the excerpt 'not cosy and homelike' imply that there is greater interest concerning the outward appearances of the family and how other people see them, rather than their emotions and feelings of one another. ...read more.

However, World War One broke out two years later and continued into a international collapse in the economy. This show his na�vety at what is happening throughout the world and destroys this idea of business acumen that he thought he had shown by the quotes "hard-headed businessman". Hindsight is further used by Priestley when he maintain that the titanic is "unsinkable". Mrs Birling, Sheila and Eric leave the room which gives the opportunity to for Mr Birling and Gerald to talk alone. This speech by Mr Birling underlines his insecurities of what people think of him and his family. he says "I have an idea that your mother - Lady Croft - while she doesn't object to my girl - feels you may have done better for yourself socially." This has obviously manifested in his head adding to the already large anxiety he feels, and so encourages him to hint at his name being in the next honours list, "I might find my way into the next honours list." But he cant stop there and has to boast that it is "just a knighthood of course." In the opening section of the act he brags that they are drinking "exactly the same port as your father." ...read more.

The silence of Mrs Birling when accused is taken by the Inspector as an admition. It is plain to see that Mrs Birling was prejudiced towards Eva Smith and was to self-important to help her because Mrs Birling saw it as degrading to help someone of such less social standing. Priestley shows that social status is the origin of superiority and therefore positions of power are ill-used and compassion to other people is forgotten through this use of prejudice. In An Inspector Calls Priestley uses many different techniques. For example he utilizes hindsight to show that Birling's view of the future is deluded and that anything he says or believes is mistaken, including his social and political values. Inspector Goole on the other hand is the complete opposite of Birling. He is Priestley's voice in the play, he knows that the behaviour and type of person someone is cannot possibly be affected by what type of social background they have. Through the Inspector Priestley calls for a change in the old ways of the ruling classes and a totally new system. One thing that is clear is that the audience are drawn to the strong willed Inspector and the offstage voice of Priestley and find themselves repelled by the formulaic Birling household, with its materialistic and selfish opinions who offer no support for anyone outside their family. ...read more.