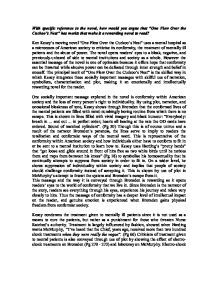 With specific reference to the novel, how would you argue that &quot;One Flew Over the Cuckoo's Nest&quot; has merits that make it a rewarding novel to read?

With specific reference to the novel, how would you argue that "One Flew Over the Cuckoo's Nest" has merits that make it a rewarding novel to read? Ken Kesey's moving novel "One Flew Over the Cuckoo's Nest" uses a mental hospital as a microcosm of American society to criticise its conformity, the treatment of mentally ill patients and the abuse of power. The novel opens readers' eyes to a bleak, negative, and previously-unheard of side to mental institutions and society as a whole. However the essential message of the novel is one of optimism because it offers hope that conformity can be thwarted while abusive power can be defeated through inner strength and belief in oneself. The principal merit of "One Flew Over the Cuckoo's Nest" is the skilled way in which Kesey integrates these socially important messages with skilful use of narration, symbolism, characterisation and plot, making it an emotionally and intellectually rewarding novel for the reader. One socially important message explored in the novel is conformity within American society and the loss of every person's right to individuality. By using plot, narration, and occasional bleakness of tone, Kesey shows through Bromden that the conformed lives of the mental patients are filled with mind-numbingly boring routine from which there is no escape. ...read more.

(Pg 66) Criticism of treatment given to mental patients is also conveyed through use of plot by showing the effect of electro-shock treatments on Bromden (Pg 270 - 273) and lobotomy on McMurphy. Electro-shock treatment disorientated Bromden and McMurphy for days while lobotomy takes all life and vitality from McMurphy, leaving "one of those store dummies". The newly revealed aspect of treatment for mental patients instils a sense of horror within readers for we realise that no human being should have to undergo these types of treatment that causes harm instead of benefit. We also feel sympathy and awareness, resulting from our new exposure to a negative side of treatment for mental patients. Readers start re-evaluating their views and opinions, as well as now becoming more interested and concerned about the treatment of people who are deemed as "abnormal" in our society. Abuse of power within society and its negative consequences is another strong message that Kesey conveys through characterisation, narration and plot. Nurse Ratched is the comic-like villain used to represent the destructive abuse of power that occurs within the mental ward, signifying at a wider level the abuse of power in American society. She is a non-humane machine that wields power over all the patients by exposing all their vulnerabilities and using fear and intimidation, exemplified in Harding's lines, "She has a genius for insinuation... ...read more.

The novel is therefore fully gratifying for it is both mentally and emotionally stimulating. It is certainly true that many s****t and r****t elements occur in "One Flew Over the Cuckoo's Nest". The only good-hearted females are prostitutes, implying that females are only "good" if they offer themselves to males. Females are seen as the ones who control the conformist and power-abusing system, shown in Harding's lines of "the doctor doesn't hold the power ... that power goes to the supervisor, and the supervisor is a woman ... we are victims of a matriarchy here, my friend." (Pg 59) In addition to its s****t elements, the novel also has many r****t aspects for the only black people are the cruel henchmen of Nurse Ratched who reinforce her power and machine-like efficiency. However, though this novel has elements of sexism and r****m mainly due to its characterisation, it is still nevertheless a rewarding read because these elements are relatively minor and do not interfere with Kesey's socially important messages. Kesey's critique of treatment for mental patients, abuse of power and conformity within society are highly relevant even in today's modern world. Through using plot, characterisation, narration and symbolism, he exposes many of society's flaws to us and cause us to question the accepted ways of society's thinking and our place in it. ...read more.