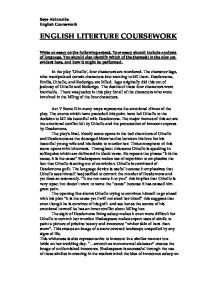 Write an essay on the following extract. Your essay should include analysis of language. You should also identify which of the theme(s) in the play are evident here, and how it might be performed.

ENGLISH LITERTURE COURSEWORK Write an essay on the following extract. Your essay should include analysis of language. You should also identify which of the theme(s) in the play are evident here, and how it might be performed. In the play 'Othello', four characters are murdered. The character Iago, who manipulated certain characters into wanting to kill them. Desdemona, Emilia, Othello, and Roderigo, are killed. Iago originally did this out of jealousy of Othello and Roderigo. The deaths of these four characters were inevitable. There was justice in this play for all of the characters who were involved in the killing of the four characters. Act V Scene II in many ways represents the emotional climax of the play. The events which have preceded this point have led Othello to the decision to kill his beautiful wife Desdemona. The major themes of this act are the emotional conflict felt by Othello and the protestation of innocent express by Desdemona. The play's final, bloody scene opens in the bed chambers of Othello and Desdemona as the deranged Moor battles between his love for his beautiful young wife and his desire to murder her. This atmosphere of this scene opens with bitterness. Throughout this scene Othello is speaking in soliloquies which are delivered in blank verse. ...read more.

Having destroyed her physical body he felt would detach her from her physical sin that he though she was guilty of Shakespeare makes interesting use of metaphor. He refers to Desdemona as a flaming minister. This metaphor invokes ideas around the devil as the prime minister of evil, flames of hell and the quenching of these, as Othello said he would, the recapture of Desdemona from the devils clutch. Shakespeare speaks of two lights in this part of the play. One is the light of purity and the other the fire of passion that Othello believes Desdemona is feeling for another. By killing her Othello hopes to extinguish the latter and rekindle the former. "thou cunning'st pattern of excelling nature," Othello believes Desdemona is shy and unfaithful. Towards the end of the soliloquy Othello leans forward and kisses the sleeping Desdemona, but while doing this he is persuaded not to kill her. This simultaneously arouses his love and his jealousy. It makes him reluctant to commit the murder but the pain of his betrayal makes him more determined to kill her. This point is the climax of the tension. Othello states that it is her balmy breath that almost makes his forget what he must do. ...read more.

It emphasis his determination to see through the act. It also revels that Othello is battling not to allow thoughts of compassion to dissuade him. "Then heaven have mercy on me." Desdemona speech arouses sympathy in the reader. In the end of the act Desdemona life is portrayed as being in the hands of Othello. Othello is bent on taking her life but even to the end wishes her mercy in the after life. Desdemona remains in the light of innocence but yet doomed. The play is a tragedy because all the sympathetic characters dies. Othello kills himself because of killing his fair chaste wife Desdemona. Desdemona is killed by Othello because of Othello's lack of comprehension to Desdemona wrongly committing adultery. Emilia is killed because of speaking the truth about the racist antagonist her husband Iago is. This is ironic as many consider Iago is a good honest man. But are obviously very gullible, as this isn't the true side of Iago. I think that the tragedy is more dependant on Iago's wickedness than Othello's willingness to be led because Iago is such a clever, devious character who is a genius. Othello is totally influenced by Iago's power, which in the end pulls him down. I finish my essay by asking you if Othello is a Christian, kind noble man if so, then why did he kill his fair chaste wife Desdemona? By SEYE AKINNAIKE Seye Akinnaike English Coursework ...read more.