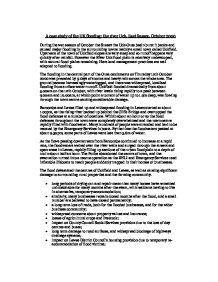 A case study of the UK flooding: the river Uck, East Sussex, October 2000

A case study of the UK flooding: the river Uck, East Sussex, October 2000 During the wet season of October the Sussex the Uck-Ouse basin burst it banks and caused major flooding in the surrounding towns mainly a small town called Uckfield. Upstream of the town of Uckfield slopes are very steep and so runoff happens very quickly after rainfall. However the River Uck flood plain is relatively undeveloped, with natural flood plains remaining. Here land management practices are well adapted to flooding. The flooding in the central part of the Ouse catchments on Thursday 12th October 2000 was preceded by 3 days of storms and heavy rain across the whole area. The ground became increasingly waterlogged, and there was widespread, localised flooding from surface water run-off. Uckfield flooded dramatically from about 5.00am on the 12th October, with river levels rising rapidly to a peak between 9.00am and 10.00am, at which point a torrent of water up to 1.9m deep, was flowing through the town centre causing considerable damage. Barcombe and Lewes filled up and widespread flooding in Lewes started at about 1.00pm, as the rising river backed up behind the Cliffe Bridge and overtopped the flood defences at a number of locations. ...read more.

due to the temporary loss of several of their buildings, including their control centres, and loss of vehicles; * in Lewes, 118 Listed Buildings and 230 other 'traditional' buildings within the Conservation Area were damaged, requiring specialist repair; * long term needs for emotional support amongst some. This means that the upper and middle sections of the catchments become quickly saturated following heavy rainfall. During wet periods a large proportion of the rainfall will quickly run-off into the river system rather than drain through the ground, and this effect is exacerbated by the hilly nature of the upper parts of the catchment. * increasing the amount and rate of surface water run-off, thereby increasing flows; * reducing the area available for flood storage, thereby increasing peak levels; * reducing the area available for flood flow conveyance, thereby increasing peak levels, contributing to rapid inundation and high flood velocities, and extending the period of flooding. * River flows were increasing very rapidly at this time and continued to do so for several hours after the flood defences were overtopped. * The upstream flood storage areas were already 'full' so that the majority of the flood flows passed straight downstream to Lewes with little attenuation. ...read more.

Nevertheless we believe that there are a number of important issues relating to the existing flood defences in Lewes which need to be urgently addressed, in particular the apparently poor condition of many of the river walls through the town, and the long term settlement in the upstream flood embankments. The floodwalls were breached or damaged in at least 8 locations through the town, and the sudden failure of the river wall at Phoenix Industrial Estate is particularly worrying. The flooding took many residents by surprise, and it is clear that the Environment Agency and a significant number of affected residents have very different perceptions about the performance of the flood warning system. This is partly an issue of communication and education. We believe that it is important that the Environment Agency vigorously continues its efforts to educate local residents, and that it is explicit about its actual responsibilities and capabilities. With the benefit of hindsight, we also believe that a number of important improvements in the flood warning and forecasting service can be identified, and should be undertaken. These would not have had any impact on the extent, speed or depth of the actual flooding, but they may have meant that for many, vehicles, stock, or precious personal possessions might have been saved. ...read more.