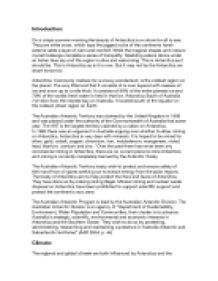 ﻿Introduction: On a crisps summer morning the beauty of Antarctica is on show for all to see. The pure white snow, which tops the jagged rocks of the continents harsh exterior adds a layer of calm and comfort. While the magical shapes and colours myriad icebergs complete a sense of tranquility. Sparkling waters dance under an Asher blue sky and the region is alive and welcoming. This is Antarctica as it should be. This is Antarctica as is it is now. But it may not be the Antarctica we share tomorrow. Antarctica. Commonly mistook for a snowy wonderland, is the coldest region on the planet. The very little land that it consists of is over layered with masses of ice and snow up to a mile thick. It consists of 90% of the entire planets ice and 70% of the worlds fresh water is held in that ice. Antarctica South of Australia 7,014km from the nearest bay on Australia. It located south of the equator on the coldest, driest region on Earth. The Australian Antarctic Territory was claimed by the United Kingdom in 1993 and was placed under the authority of the Commonwealth of Australia that same year. The AAT is the largest territory claimed by a nation on Antarctica. In 1980 there was an argument in Australia arguing over whether to allow mining on Antarctica. Antarctica is very dear with minerals. It is hoped to be mined for silver, gold, cobalt, copper, chromium, iron, molybdenum, manganese, nickel, lead, titanium, uranium and zinc. ...read more.

It slowly has become the most catastrophic global problem. Pollution is the main cause of global warming and if something it not done about it soon the effects of it will take a toll on Antarctica?s wild life. Oil spills are becoming more and more common in Antarctica?s waters. The cause of more oil spills is simple, the increasing of shipping activity. There isn?t really an easy way to prevent oil spills. If there was a way it would have to be to leave the oil in the ground in the first place, which is most likely not going to happen. If an easier solution is not thought of the ozone layer in Antarctica will become more an more unstable to support life. Mawson Station: Mawson Station is one of many research stations. It has been built on a rock formation on the edge of the Antarctic plateau. Mawson station is managed and was built buy the Australian Antarctic Division (AAD). It was named after Sir Douglas Mawson, Antarctic explorer.?It is Australia?s first continental station and the longest continuously operating station south of the Antarctic Circle.? (Antarctica.gov.au 2011, Mawson Station). Antarctica is approximately 7,014 kilometers from Australia. It would take roughly 8 hours and 43 minutes on a plane to travel from Australia to Antarctica if traveling at 500mph. The nearest city in Australia to Antarctica. The closest large city (200,000 or more) is Hobart. It is 3,575 miles or 5,754 kilometers from Antarctica. There are many permanent research stations. In fact there are 23 permanent stations, though one is shared by both Italy and France. ...read more.

Behavioral Adaptions: The Emperor penguin crowds together with other Emperor penguins to keep warm. They form one huge pack and take turns standing on the outside and in the middle. Because otherwise only the penguins in the middle would survive while the others are blown away and frozen by the wind. The Emperor penguins breed during Winter so the chicks are large enough to become independent during the summer abundance of food. Physical adaptions Emperor penguins have four layers of scale-like feathers. This forms a good protection from wind. Emperor penguins also have a thick layer of fat. These layers of fat act as insulation keeping the penguin warm. Conclusion: Antarctica is a unique place because there is no other place like it on Earth. It is very peaceful and cut off from the rest of the world. One day lasts half a year and the night lasts the other half. Some of the rarest endangered species accept Antarctica as their home. However there are no land animals: mammals, reptiles and amphibians. There are several species of penguins, fish, birds, seals, squid and whales in Antarctica that can be found no where else in the world. This magical, mythical island has been free from man?s destructiveness until now. Over the last few years the planet is becoming more and more polluted and global warming is taking a toll on the innocent land of Antarctica. If we do not act now it may be to late to save Antarctica and it will perish. The Antarctic species numbers already are slowly diminishing. Most of the animals in Antarctica now are endangered because we don?t act. We need to stop global warming before it stops us. ...read more.