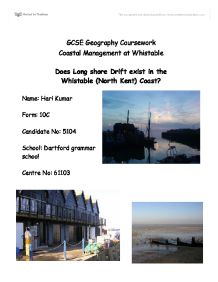 GCSE Geography Coursework Coastal Management at Whistable Does Long shore Drift exist in the Whistable (North Kent) Coast? Name: Hari Kumar Form: 10C Candidate No: 5104 School: Dartford grammar school Centre No: 61103 Coastal Management at Whistable Hari Kumar 10C - England Chapter 1- Introduction Geographical Background-The Theme of my investigation is Coastal management in Whistable. Coastal management is the act of stopping or slowing down natural processes such as erosion, this is done by using different types of coastal management such as sea wall and groynes. There are several different themes and ideas that revolve around the coast. One is the idea of coastal erosion; there are four main types of coastal erosion. And they are Hydraulic (the constant force of the waves crashing against the shore), Abrasion (where material being carried by the waves wears away the cliff), Attrition (this is where rocks and pebbles being carries by the wave are smashed against each other) and Corrosion (where acidic solutions in the water dissolve away the rock). The Weather conditions at the time of the trip were: Very windy, Cloudy with a couple of sunny spells. The direction of the wind was South- west and the wind speed was around 20mph. The two processes of transportation and deposition happed due to two different types of waves, Constructive and Destructive. Constructive waves are a lot less powerful than destructive waves; they tend to deposit and transport away material as they have a strong swash on the shore and a weak back wash. While destructive waves are the opposite- they appear during storms, they are very strong and violent; they tend to remove material from the coast as their backwash is much stronger than their swash. This is relevant to Whistable as there is long shore drift. Information sources Through out by project, I have used two types of information, primary and secondary. ...read more.

This is shown in the photo below: 2.Long shore drift Location: By West Groyne Distance Travelled: 3m Pattern of movement: Time Taken: 10 seconds Direction: East Location: By East Groyne Distance Travelled: 2m Pattern: Time Taken: 10seconds Direction: East This test was done to show the existence of long shore drift and since my investigation is on LSD, this is by far the best test technique to use to prove my hypothesis. The results show me that long shore drift does exist in Whistable. To explain- when I threw the dog biscuit into the sea it started to move east along the coast in the direction of the prevailing wind. I timed and measured the distance of it to calculate the speed of long shore which is 0.2 meters per second (Speed= distance/ time). I also drew out the pattern of movement it took and compared with the pattern that LSD is supposed to have and it was very similar- therefore this technique is evidence of the existence of LSD in Whistable. The details of my findings are above such as the direction it travelled and by what location I did it in. Also I included a picture diagram annotating LSD. Both areas have the same pattern and similar rate of Long shore drift. This technique is a very good way for me to prove that LSD exists in Whistable as it directly shows evidence of it i.e. making the biscuit move. 3. Wave Survey Waves Per Minute Location 1 (east Groyne) Location 2 (West Groyne) 1st 19 18 2nd 21 17 3rd 22 19 This was the count or frequency of the waves that broke on the shore of Whistable. I sat and counted the number of waves over 3 different minutes at two different locations - one at either side of the Groyne. Looking at both locations, they have quite similar frequencies so that means that LSD must have the same frequency on either side of the Groyne. ...read more.

If more time had been spent on the field work that was in the town (or having a longer time in general) rather than spending too much time in the beach, it would have provided more time to collect more views resulting in more data and a more reliable conclusion. Longer experiments would provide opportunity to collect more data giving a wider representation for example in the questionnaire, and generally a more reliable result. Also a return visit would provide plenty more time to carry out the tests again, allowing as much time as needed - this will provide much more data and findings than with a time constrain; resulting in results that are much more accurate, reliable and valid. Despite well thought out planning and preparation a number of errors crept in which impacted on the quality of the fieldwork as mentioned above. These errors originated from the quality of the original investigations and made results less reliable. If more time and better equipment as well as improving the way in which the investigations were carried out occurred then the whole project would have been more reliable. If the results were better such as a larger sample of questions in the questionnaire and randomly chosen rather than selected pebbles for the sample, bias would have been further reduced and a larger number of responses would have made results far more accurate as findings would have been more representative of the general area. More sampling on the beach itself would similarly have generated better quality results making the acceptance of the hypothesis far more reliable. As it is the hypothesis can not be accepted entirely without this in mind. A return visit or sampling at another location could reveal very different results! Rather, a larger fieldwork with a comparison of another site and a worked out average would be beneficial and make the project more robust. If I had more time then this would certainly be a worthwhile way forward to make the project better. ...read more.