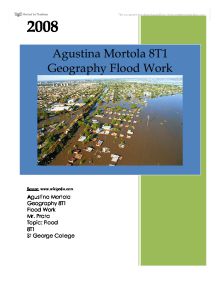 Research into the problem of flooding in the town of Santa Fe in Argentina.

2008 Source: www.wikipedia.com Agustina Mortola Geography 8T1 Flood Work Mr. Prata Topic: Flood 8T1 St George College INDEX Santa Fe 3 Localization 3 Map1: Santa Fe 3 Map2: Santa Fe towns (effective area) 4 Time line of floods in Santa Fe 7 Pictures of different Floods in Santa Fe 8 Description of the Flooding 9 Santa Fe After Flood 9 Method use to prevent flooding 11 Natural or human causes? 11 Impact of Flood 12 Solutions: 12 Picture11: Santa Fe after flooding 13 Final Revision 14 Bibliography 15 Flood Work Santa Fe Localization "Santa Fe is the capital city of province of Santa Fe, Argentina (Map1). It sits in northeastern Argentina in a plain, near the junction of the Parana and Salado rivers that flow in to La Plata River (Map5). It lies opposite the city of Parana, to which the Hernandarias Sub fluvial Tunnel links it. Santa Fe is the commercial and transportation centre for a rich agricultural area that produces grain, vegetable oils, and meats. The city in its current location is still not immune to flooding. The most affects towns were: Garay some parts of San Justo and also Helvecias, these are the cities that are between Parana and Salado Rivers."(Map2) Map1: Santa Fe Source: http://www.aseguraronline.com/imagenes/dondeestamos/santafe.gif Map2: Santa Fe towns (effective area) Source: http://colebioqsf2.org.ar/congreso2006/index.2.gif The Paran� River: is a river in south central South America, running through Brazil, Paraguay and Argentina over a course of some 2,570 kilometers (Map3). ...read more.

out the city but, this method wasn't good, because although they use lots and lots of sand bags the water will go in the city. In the flood of 2003 the method was different they made a wall along the Salado River, that was the river that floods and they put hydraulic pumps, to put the water out the city. This method was good, because they could put the water out faster and they could recue something, also it's good because they are prevented for next flooding Pictures of different Floods in Santa Fe Picture3 Picture4 Source: http://www.taringa.net/posts/1021362 Source: http://www.taringa.net/posts/1021362 Picture5 Picture6 Source: http://www.taringa.net/posts/1021362 Source: http://www.taringa.net/posts/1021362 Description of the Flooding On 28 April of 2003, after several days of intense rain, the province of Santa F�, one of the richest in Argentina in terms of harvest and cattle, suffered a devastating flood when the Salado River broke its banks. Within just a few hours, one third of the capital city, Santa F�, and a vast area of the province was flooded. It rains more than 500 ml. The Most affects cities were: Garay, some parts of San Just and Helvecias, that are the cities that are near Parana an Salado River. The lower lands were the faster floods. The water comes from the City of Recreo, (in the North of the capital), the water comes very strong and in 48 hours all the city of Santa Fe was down Water. ...read more.

in all the river basin � routes badly constructed � global heating Impact of Flood � 23 died (recognized officially the 8 of May of 2003) � 28,000 affected houses � 75,000 evacuated people � 5,000 farming establishments out of service � 2.000.000 of hectares were the affected ones in the field. � 1.500 million dollars are the considered cost to reconstruct the infrastructure of the city, the farming houses and losses. The secretary of Agriculture and Cattle ranch of the province, Oscar Alloatti, maintained that losses are " very big" in the farming sector, and it added that " the bulk than is horticulture, milk, meat production and grains, reached 1,226 million of weights in provincia". "The main loss is in cattle ranch, with 510 million weights, and in dairy also important" are losses; , it indicated the secretary. Solutions: * In my opinion to make a dock to regulate the flow of the Salado river, serious expensive, but as the floods of the Salado river do not take place very often the dock could be made. To others to construct to a dock, bring many benefits, since there is people who this ready to invest in energy sources, like the hydroelectric one which it is produced by a dock, since these have turbines produce that it, and simultaneously the dock, this regulating the volume of the river, since when the level of the same raises, the floodgates are close, letting a small openings that control the water. ...read more.