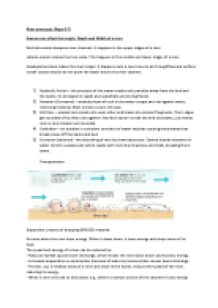 ﻿River processes (Page 6-7) Erosion can affect the length, Depth and Width of a river Vertical erosion deepens river channels. It happens in the upper stages of a river. Lateral erosion makes the river wide. This happens in the middle and lower stages of a river. Headward erosion makes the river longer. It happens near a rivers source as throughflow and surface runoff causes erosion at the point the water enters the river channel. 1. Hydraulic Action ? the pressure of the water breaks rock particles away from the bed and the banks. Its strongest in rapids and waterfalls and during floods. 2. Abrasion (Corrasion) ? eroded pieces of rock in the water scrape and rub against banks, removing material. Most erosion occurs this way. 3. Attrition ? eroded rock smash into each other and break into smaller fragments. Their edges get rounded off as they rub together. Attrition doesn?t erode the bed and banks, just makes rock in river smaller and rounded. 4. Cavitation ? air bubbles in turbulent stretches of water implode causing shockwaves that break pieces off the banks and bed 5. Corrosion (solution) - the dissolving of rock by chemical proces. ...read more.

This is called the graded profile (but it hardly ever happens) A rivers course can be split into three stages. The energy of a river varies in each stage. 1. In the upper stage, the gradient is steep and the river is high above sea level, which gives It lots of potential energy (energy that can be converted)<e.g. source ? mountain><landform ? lake> 2. As gradient decreases towards the middle stage, potential energy is converted to kinetic energy (movement) ? the river gains velocity <Landform: Lake> 3. In lower stage, river has little potential energy but lots of kinetic energy ? it flows better <E.g. mouth: sea> Channel characteristics affect velocity and discharge. Velocity (kinectic energy) and discharge of a river increase as you go downstream from source to mouth. Discharge increases as tributaries and more surface runoff join the main channel. River velocity is influenced by gradient, discharge and channel characteristics ? the shape and roughness. 1. Most of rivers kinetic energy is used to overcome friction. The rest causes erosion 2. The more energy a river has available for erosion and transportation, the more efficient it is 3. ...read more.

and riffles (shallow water) develop at equally spaced intervals along a stretch of a river. The distance between pools is 5-6 times the width of the river bed. Because the river channel is deeper in pools its more efficient so it has more energy. Energy is lost at the riffle because of friction. The spacing and distance between riffles and pools causes the rivers flow to becomes uneven and maximum flow to become uneven and maximum flow to be concentrated on one side of the river Turbelence increases in and around pools as the water speeds up, so the flow of water begins to twist and coil. This causes corkscrew like currents in the river called helicodial flow, which spiral from bank to bank between pools. The helicodal flow causes more erosion and deepening of the pools. It causes eroded material to be deposited on the inside of the next bend where the river looses energy. The combination of erosion and deposition exaggerates the bends until large meanders are formed. The combined processes also create the meanders? distinctive asymmetrical cross section. Oxbow lakes are formed when the neck of the loop of a meander is broken through, often during flooding. Deposition dams off the loop leaving an oxbow lake. ...read more.