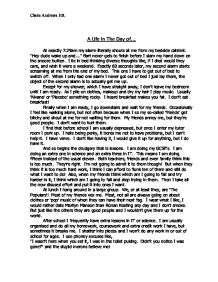 A Life in The Day of... At exactly 7:29am my alarm literally shouts at me from my bedside cabinet. "Hey dude wake up and...." Bart never gets to finish before I slam my hand down on the snooze button. I lie in bed thinking diverse thoughts like, if I died would they care, and wish it were a weekend. Exactly 60 seconds later, my second alarm starts screaming at me from the end of my bed. This one I have to get out of bed to switch off. When I only had one alarm I never got out of bed I just lay there, the object of the second alarm is to actually get me up. Except for my shower, which I have straight away, I don't leave my bedroom until I am ready. As I pile on clothes, makeup and dry my hair I play music. Usually 'Nivana' or 'Placebo' something rocky. ...read more.

I'm not going to admit it to them though! But when they think it is too much hard work, I think I can afford to flunk ten of them and still do what I want to do! Also, when my friends think which am I going to fail and try harder in it, I think which am I going to fail and stop trying in them. Then I take all the now disused effort and put it into ones I want. At lunch I hang around in a large group. We, or at least they, are 'The Populars'! Most of my friends vex me. Most, not all are always going on about clothes or 'pop' music of when they can have their next fag. I wear what I like, I would rather date Marilyn Manson than Ronan Keating any day and I don't smoke. But just like the others they are good people and I wouldn't give them up for the world. ...read more.

When I am tired I go to bed, my parents don't know what time I go to bed, because they don't see me all day except teatime. Tea is generally a rush. I shovel it in eager to leave the idle 'chit chat' that goes on around me. My brother takes the mick. He calls me a recluse. My brother's stupid. He is sixteen and like all teenagers he believes the world revolves around him. Just like I do! It would damage the world if I died. Society as we know it would break down. At least for a day or two. I always think of death before I sleep. Sometimes I ponder whether to kill myself just to see what would happen. I never do, obviously! But maybe I will, someday. And on the morbid thoughts of slitting wrists, overdoses and jumping off buildings I slip into a paradise world, where I do not have verve, my friends don't care and I know all. I lie asleep in a dream. I would stay if I could. Claire Andrews 10L ...read more.