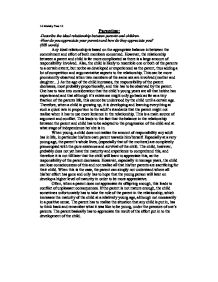 Lil Maisky Year 11 Parenting: -Describe the ideal relationship between parents and children. -How do you appreciate your parents and how do they appreciate you? (400 words) Any ideal relationship is based on the appropriate balance in between the commitment and effort of both members concerned. However, the relationship between a parent and child is far more complicated as there is a large amount of responsibility involved. Also, the child is likely to resemble one or both of the parents to a certain extent, but not be as developed or experienced as the parent, thus adding a lot of competition and argumentative aspects to the relationship. ...read more.

Therefore, when a child is growing up, it is developing and learning everything at such a quick rate in proportion to the adult's standards that the parent might not realise when it has to use more lenience in the relationship. This is a main source of argument and conflict. This leads to the fact that the balance in the relationship between the parent and child has to be adapted to the progression of the child and at what stage of independence he/ she is in. When young, a child does not realise the amount of responsibility any adult has in life, in particular his/hers own parent towards him/herself. ...read more.

Often, when a parent does not appreciate its offspring enough, this leads to conflict of unpleasant consequences. If the parent is not mature enough, the child sometimes unfortunately has to take the role of the parent in the relationship, which increases the maturity of the child at a relatively young age, although not necessarily in a positive sense. The parent has to realise the situation that any child is put in, has to think back and remember what it was like to be young, under the pressure of one's parents. The parent basically has to appreciate the result of the effort put in to the development of the child. ...read more.

This is an excellent essay that was wonderful to read and mark. It shows a good understanding of the varying needs of the child and discusses how conflict can arise.

If the writer wanted to extend the essay, they could discuss some of the theories that look at how relationships develop and how conflict arises.