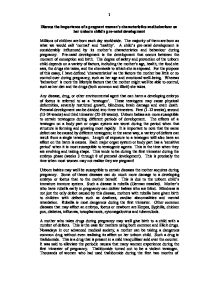 Discuss the importance of a pregnant woman's characteristics and behaviour on her unborn child's pre-natal development.

Discuss the importance of a pregnant woman's characteristics and behaviour on her unborn child's pre-natal development Millions of children are born each day worldwide. The majority of them are born as what we would call 'normal' and 'healthy'. A child's pre-natal development is considerably influenced by its mother's characteristics and behaviour during pregnancy. Pre-natal development is the development that occurs between the moment of conception and birth. The degree of safety and protection of the unborn child depends on a variety of factors, including the mother's age, health, the food she eats, the drugs she takes, and the chemicals to which she is exposed. For the purpose of this essay, I have defined 'characteristics' as the factors the mother has little or no control over during pregnancy, such as her age and emotional well-being. Whereas 'behaviour' is more the lifestyle factors that the mother might well be able to control, such as her diet and the drugs (both common and illicit) she takes. Any disease, drug, or other environmental agent that can harm a developing embryo of foetus is referred to as a 'teratogen'. These teratogens may cause physical deformities, severely restricted growth, blindness, brain damage and even death. ...read more.

Unfortunately some of the most commonly used drugs are responsible for certain defects on an unborn child. Heavy use of aspirin has been linked to foetal growth restriction, poor motor control and even infant death (Barr et al., 1990; Kelley-Buchanan, 1988). Use of ibuprofen during the third trimester increases the risk of prolonged delivery and pulmonary hypertension in newborns (Chomitz, Chung, & Lieberman, 2000). Even antidepressants containing lithium can produce heart defects when taken in the first trimester (Friedman & Polifka, 1996). This brings us on to one of the most common drugs, alcohol. In 1973, Kenneth Jones and colleagues described a foetal alcohol syndrome (FAS) that affects many children of alcoholic mothers. The most noticeable defects of FAS are that of microcephaly (small head) and malformations of the heart, limbs, joints and face (Abel, 1998). FAS babies are likely to display excessive irritability, hyperactivity, seizures and tremors. They are also lighter and smaller than normal. The majority of the 3 in 1000 babies born with FAS score well below average in intelligence throughout childhood and adolescence. So how much can a mother drink without harming her baby? The symptoms of FAS are most severe when the 'dose' of alcohol is highest (mother is an alcoholic). ...read more.

Adding a small amount of magnesium and zinc to a mother's diet improves the functioning of the placenta and reduces birth complications. Diets rich in folic acid help prevent Down syndrome, spina bifida, anencephaly and other defects of the neural tube. Having said this, the ingestion of too much mineral supplement (e.g. vitamin A) can produce birth defects. The mother's emotional well being during pregnancy may well have an effect on the unborn child' development. During times of stress, her glands secrete powerful activating hormones such as adrenaline. These hormones may cross the placental barrier, enter the foetus's bloodstream and increase the foetus's motor activity. Prolonged and severe emotional stress is associated with stunted prenatal growth, premature delivery, low birth weight and other birth complications (Lobel, 1994; Paarlberg et al., 1995). Many factors have been discussed that affect a normal pregnancy. Therefore it is extremely important for all potential mothers to look after themselves during those nine months. Even constant exposure to an unfit environment may cause problems. For example being surrounded by smokers or even constant heavy air pollution. To ensure the likelihood of a normal pregnancy, mothers should stay well away from both common and illicit drugs or consult their doctor about over the counter prescriptions. This, combined with a healthy, plentiful diet, should reduce any risk of abnormalities and birth complications. ...read more.