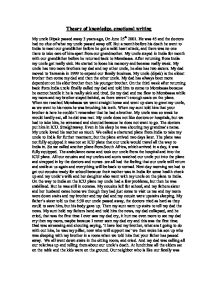 Theory of knowledge, emotional writing My uncle Dipak passed away 3 years ago, On June 25th 2001. He was 45 and the doctors had no clue of what my uncle passed away off. But a month before his death he went to India to meet our grandfather before he got a mild heart attack, and there was no one there to take care of him apart from our grandmother. My uncle stayed in India for month with our grandfather before he returned back to Mombassa. After returning from India my uncle got really sick. He started to loose his memory and became really weak. My uncle has two more brothers my dad and my other uncle, he also has two sisters. My dad moved to Tanzania in 1999 to expand our family business. My uncle (dipak) is the eldest brother then come my dad and then the other uncle. My dad has always been more dependent on his elder brother then his younger brother. ...read more.

We called a chartered plane from India to take my uncle to India for further treatment, but the plane arrived two days later. The plane was not fully equipped it was not an ICU plane that our uncle would travel all the way to India in. So we called another plane from South Africa, which arrived in a day, it was fully equipped. The ambulance came and took our uncle from the hospital and into the ICU plane. All our cousins and my uncles and aunts watched our uncle put into the plane and strapped in by the doctors and nurses .we all had the feeling that our uncle will return and smile at us again and everything will be back to normal. Next day morning we had to get out cousins ready for school because their mother was in India for some health check up and my uncle's wife and her daughter also went with my uncle on the plane to India. ...read more.

we then woke his son up who was sleeping with my brother in a room when we told him that your father has passed away. We all went down stairs in the sitting room, and cried. And my dad was calling all our relatives up and telling them about our uncle's death. At lunchtime all the elders sat on the table and the kids were on the ground. Our neighbor who is like our family was sitting next to my mom when she fainted on my mom's shoulder, we picked her up and laid her on the sofa, suddenly she started speaking in our uncles voice that passed. He said to my cousin that you're the man of the family and that you have to take care of your mom and sister. He also told my dad to take care of his family. And finally he said that whenever you need me just think of me and I will be there. And don't forget me cause I will never forget you. ...read more.