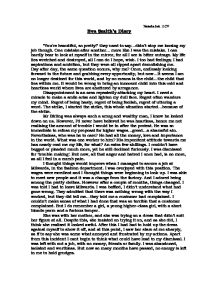 Eva Smith's Diary "You're beautiful, so pretty!" they used to say...didn't stop me loosing my job though. One mistake after another... more like I was the mistake. I can hardly bear to look at myself in the mirror, for all I see is bitter outrage. My life lies wretched and destroyed, all I can do I hope, wish. I too had feelings; I had aspirations and ambition, but they were all ripped apart demolishing me. Day after day, the same question occurs, why me? Once, endlessly looking forward to the future and grabbing every opportunity, but now...It seems I am no longer destined for this world, and by no means is the child...the child that lies within me. It would be wrong to bring an innocent child into this cold and heartless world where lives are shattered by arrogance. Disappointment is an area repeatedly attacking my heart. I need a miracle to make a smile arise and lighten my dull face. Regret often wanders my mind. Regret of being hasty, regret of being foolish, regret of uttering a word. The strike, I started the strike, this whole situation started...because of the strike. Mr Birling was always such a smug and wealthy man, I knew he looked down on us. However, I'd never have believed he was heartless, hence me not realising the amount of trouble I would be in after the protest. ...read more.

When I look back now, it seems I talked for hour's non-stop about myself. I guess I was so insecure and reckless, that I was willing to clutch on to almost any one who gave sympathy. I avoided going into detail about any of my past experiences, and only gave vague a description. I did however, let it slip that I was starved, so being the sensitive, kind man he was, ordered me some food. Days later, we met again, I remember my heart beating so fast it could have won a marathon. The thought of being so near some one delighted me. But little did I know this was soon to end. When we did meet, he discovered I hadn't a single penny, and I was soon to be evicted from the room I was staying in. Filthy place, but I had no alternative. Gerald then came to my rescue, again. He had informed me that a friend of his, Charlie something, had gone to Canada and had left him the key to his house in Morgan Terrace. He insisted on letting me move into one of the rooms. He also offered me money. "It's just until you get back on your feet, I don't want you having to go back to the Palace bar, it's not a nice palace," he had said, but I know now he just felt sorry for me, he didn't really care. ...read more.

She even shouted at me, in front of her colleges, who were so influenced, they were persuaded to refuse my case. She was such a proud and harsh woman, who misunderstood my situation and dismissed it, as well as disgracing me. An arrogant and socially superior woman she was, continuously blaming the father of the child. And now, here I am, alone, desolate, and abandoned. Loneliness has become my middle name. I have no identity, no self-respect. I'm in this world...why? Existing in this life has evoked my worst nightmares and tangled me in agony. Did I do so wrong that I didn't deserve happiness, love, and opportunities? This society is cruel and cursed, and to be part of it makes my soul ache. "You're beautiful, so pretty!" they used to say...didn't stop me loosing my job though. One mistake after another... more like I was the mistake. I have no reason left to be here. My time has come. I no longer wish to be part of this wicked world or heartache, disappointment and agony. It must stop, I must make it stop. No one must survive this torture, not John Smith nor Eva Smith. As for the child, I no longer regard it as mine, it is not wanted, It has no use in the world, and no child should be brought in the world, not to suffer. The malicious world, which lies before my eyes, must change...though even if it does...I won't be here to find out. Natasha Jain 11CV ...read more.