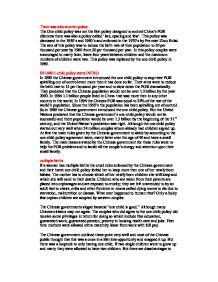 There was also another policy The One child policy was not the first policy designed to control China's PGR dilemma there was also a policy called 'late, spacing and few'. This policy was discussed in the 1950's and 1960's and enforced in the 1970's by Premier Zhou Enlai. The aim of this policy was to reduce the birth rate of their population to 20 per thousand per year by 1980 from 30 per thousand per year. In this policy couples were encouraged to marry later, leave four years between children and the maximum numbers of children were two. This policy was replaced by the one child policy in 1980. IN 1980 1 child policy starts INTRO In 1980 the Chinese government introduced the one child policy to stop their PGR spiralling out of control even more then it has done so far. Their aims were to reduce the birth rate to 13 per thousand per year and to slow down the PGR dramatically. They predicted that the Chinese population would not be over 1.2 billion by the year 2000. In 1994 1.1 billion people lived in China that was more then in any other country in the world. In 1994 the Chinese PGR was equal to 22% of the rest of the world's population. Since the 1950's the population has been spiralling out of control. So in 1980 the Chinese government introduced the one child policy. But the United Nations predicted that the Chinese government's one child policy would not be successful and there population would be over 1.3 billion by the beginning of the 21st century, and the United Nation's prediction was right. ...read more.

Traditionally boys have been valued more highly than girls have because boys keep the family name going and are expected to look after their parents when they become elderly where as girls join another family and change their surname when they get married. This is tradition all through out china not just in rural areas. Most couples who live in the city have signed the pledge of the one child policy, and have stuck by it mainly because couples who live in the city are less attached to tradition, they are more educated so they are more likely to pursue a career and don't really have the time or space for a large family. But couples in the country side have not accepted the one child policy as easy as the city couples because they believe in tradition and they desperately want a son so that he can keep the family name going and look after his parents when they become senior citizens. This is one of the many reasons why there is an increasing amount of abandoned and orphaned girls in China, as well as a huge gender difference in China. To challenge this lots of births are not recorded and tests to find out the sex of the baby before it is born are now banned. boys in other countries gender difference Gender difference In 1994 51.5% of the recorded Chinese population was male and 48.5% were female this began to cause a huge gender imbalance. In 1995, there were 118 boys under the age of 5 for every 100 girls born in China. But in the rest of the world 106 boys are born for every 100 girls born. ...read more.

In Shanghai one of the most crowded cities in China the population has grown from 5 million in 1948 to about 14 million in 1993 many people are outraged by this, considering the cruelty and hurt caused by the notorious one child policy and inflicted on the Chinese citizens. I think that this is simply un-acceptable. China's population has grown from 540 million in 1949 to 1.1 billion in 1990 doesn't this prove that the one child policy is not sufficient enough to continue. China's population was equivalent to a quarter of the rest of the world's population in 1999 this goes on to show no improvements in the Chinese PGR crisis. In my point of view the one child policy must be taken out of action. The end China has the largest population in the world and I understand the dilemma that the Chinese government is facing is very tough but I don't think introducing a one child policy was the right way to go about solving it as they violate many human rites laws and it is immoral and indecent. The one child policy is controversial because the Chinese traditionally had large families. I think that China should have consulted the United Nations about how to resolve their predicament. Population density's The West of China has about 10% of the population living in 60% of the land area. Where as some areas have less than 1 person per kilometre squared. The highest population densities are found in the eastern lowlands. The floodplains in the eastern lowlands have fertile soils and longer growing seasons which contributes to the population being so high in those areas. ...read more.