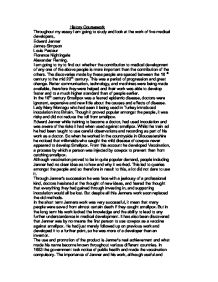 Throughout my essay I am going to study and look at the work of five medical developers - Edward Jenner, James Simpson, Louis Pasteur, Florence Nightingale, Alexander Fleming.

History Coursework Throughout my essay I am going to study and look at the work of five medical developers, Edward Jenner James Simpson Louis Pasteur Florence Nightingale Alexander Fleming. I am going to try to find out whether the contribution to medical development of any one of the above people is more important than the contribution of the others. The discoveries made by these people are spaced between the 18th century to the mid 20th century. This was a period of progression and great change. Better communication, technology, and machines were being made available, therefore they were helped and their work was able to develop faster and to a much higher standard than of people earlier. In the 18th century Smallpox was a feared epidemic disease, doctors were ignorant, expensive and new little about the causes and effects of disease. Lady Mary Montagu who had seen it being used in Turkey introduced inoculation into Britain. Though it proved popular amongst the people, it was risky and did not reduce the toll from smallpox. Edward Jenner while training to become a doctor, had used inoculation and was aware of the risks it had when used against smallpox. Whilst he trained he had been taught to use careful observations and recording as part of his work as a doctor. So when he worked in the countryside in Gloucestershire he noticed that milkmaids who caught the mild disease of cowpox never appeared to develop Smallpox. From this account he developed Vaccination, a process by which a person was injected by cowpox to prevent then from catching smallpox. Although vaccination proved to be in quite popular demand, people including Jenner had no clear idea as to how and why it worked. This led to queries amongst the people and so therefore in result to this, a lot did not dare to use it. Through Jenner's succession he was face with a jealousy of a professional kind, doctors hesitated at the thought of new ideas, and feared the thought that everything they had gained through investing in, and supporting inoculation would all be lost. ...read more.

Although these people came out with similar ideas to the ones of Pasteur, it is still him that is remembered. This is on account of the time he was living in, and by this I mean that he was able to spread and publicize his work because of the amount of people in that time willing to listen to new discoveries. Pasteur's work formed the foundations for the Science of microbiology. Despite it not being his own work but rather his production of previous discoveries, which were then carried on by the elaboration of others, that have led to our public recognition of germs in our current day. So when taking this all into account I can say with much certainty that Pasteur's work was very important, I believe that he must be given credit and acknowledgment for his ability to develop, use, experiment and publicize the work of previous developers to benefit and increase the amount of medical knowledge. During the early 19th Century hospitals were dirty, damp and basically, 'Unhygienic'. They were places for the poor who couldn't afford home care when they were ill. Few effective medical treatments were available and nurses were untrained and of low repute. This meant that death rates were high, many people didn't see the need to have clean wards with caring nurses. This is where Florence Nightingale came in, she was the women that largely turned all of this around. Through struggling hard with her rich and well respected family she convinced them to let her go off to a military hospital during the Crimean war. It was there where she earned her fame by succeeding in reducing the death rate from 42% to a sheer 2%. On her return she received a large sum of money, by which she founded the Nightingale School for Nurses, she also published the best selling, 'Notes on Nursing'. ...read more.

In duration to Pasteur's work many other developers such as the likes of Koch, the scientist who expanded on Pasteur's work and by doing so managed to classify some of the germs that caused human diseases. Like Nightingale and Fleming who were both helped and motivated by the effects of war, I believe that Pasteur was too, encouraged to develop his work based on Jenner's previously discovered vaccinations for chicken cholera, anthrax and rabies, because of his ever increasing wish to discover them before such enemies as the German scientist Koch. Correspondingly Pasteur invented the process of pasteurization which enabled him to remove bacteria from substances such as milk. Due to its ability to produce safer, disease free products this procedure is still in use today. Unlike Pasteur who assembled and constructed all of his own ideas. The findings of Jenner, Simpson, and Fleming were all contrived from the work of previous discoveries made by other people. Then the accomplishment of both Fleming and Nightingale was all down to luck. The reality of war was very fundamental to the basis of their work. I also think that Nightingale's superior background meant that she had appropriate contacts of a higher status which were able to assist her, and also the fact that she was working with the lower class meant that she gathered a lot of respect and public attention. I mean whatever the circumstances it was rare at that time to see both the lower and higher classes mix together on their own accord. As with many other historical figures all of them excluding Pasteur (who had found himself being overshadowed by Koch) have had their inspiration on medical advancement overwrought because of their social positions. But when looking back on the work of all 5 people I can quite positively say that this is wrong as Pasteur's work was, and still is, the most important overall. His work is still in use today and probably will be for a long time to come, so therefore I will conclude that his work is both triumphant in the short term and the long. ...read more.