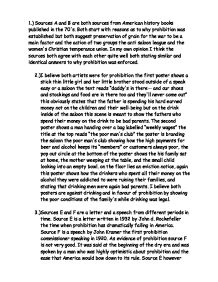 1.) Sources A and B are both sources from American history books published in the 70's. Both start with reasons as to why prohibition was established but both suggest preservation of grain for the war to be a main factor and the action of two groups the anti saloon league and the women's Christian temperance union. In my own opinion I think the sources both agree with each other quite well both stating similar and identical answers to why prohibition was enforced. 2.) I believe both artists were for prohibition the first poster shows a stick thin little girl and her little brother stood outside of a speak easy or a saloon the text reads "daddy's in there-- and our shoes and stockings and food are in there too and they'll never come out" this obviously states that the father is spending his hard earned money not on the children and their well-being but on the drink inside of the saloon this scene is meant to show the fathers who spend their money on the drink to be bad parents. ...read more.

So in my opinion I believe that source F is better in relation to evidence of prohibition as it is an account of its events not the enforcer's aims. 4.) Sources g and h are both statistics published by the city of Philadelphia police department, showing the number of offences linked to drinking. Source g shows the numbers of liqueur, spirits, alcohol and beer being seized each year by police forces as well as illegal stills. In the first section it shows the numbers in 1921 "414,000" gallons of alcohol seized however in the following years 1925 and 29 the amount seized by police forces rises dramatically twenty times more within four years. Source H however shows the number of arrests in the prohibition years. In the early years arrest rates are low and drunk drivers are at 0, however as the years go on the arrest rate again dramatically rises and doubles after the first 5 years. In my own opinion I believe that neither of the statistics show any success for prohibition and that rather than helping with the problem of drinking, prohibition actually made ...read more.

way without prohibition was the side of evil and that hope fully all of America would join in and they would be 'Ay OK', but no. most of the sources point in the opposite direction and show that the whole thing was dead from the start. As Al Capone said 'all I do is supply a public demand' and its true all America wanted to do was drink alcohol and in fact drinking of alcohol increased during those years and created more problems than it solved. The crime and profit created fuelled gang activity for decades and scarred America forever. In all I believe that prohibition was destined to fail from the beginning. However much a good idea it may have been, drink was far too much of an inbuilt part of life for those people and was engraved into their culture. So to take it away from those alcoholics who depended upon it as their drug and fix would have searched out any means possible to get back their precious booze. Even if it meant turning to crime such were the ways of the prohibition era. ...read more.