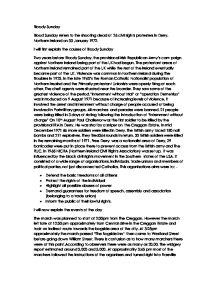 The British army faced 180 nail bombs and 211 explosives. They fired364 rounds in return. 30 British soldiers were killed in the remaining months of 1971. Free Derry was a nationalist area of Derry, 29 barricades were put in place there to prevent access from the British army and The RUC. In 1968 NICRA (Northern Ireland Civil Rights Association) was set up. It was influenced by the black civil rights movement in the Southern states of the USA. It consisted of a wide range of organisations, individuals, trade unions and members of political parties, not just disconnected Catholics. This organisations aims were to:- * Defend the basic freedoms of all citizens * Protect the rights of the individual * Highlight all possible abuses of power * Demand guarantees for freedom of speech, assembly and association (belonging to a trade union) ...read more.

At approximatlry 3:45pm most of the marchers followed the instructions of the organisers and turned right into Rossville Street to hold a meeting at "Free Derry corner". A small group of teenagers broke off from the main crowd. They tried to push the barracades and to march on The Guild Hall. They shouted insults at the troops and attacked theBritish barricade with stones. A water cannon, tear gas and rubber bullets were used to disperse the rioters. A part of the crowd continued onto William Street to the British army barricade. A riot developed between the Catholic youth in Derry and the British army. At around 3:55pm soldiers who were believed to bea machine-gun platoon of paratroopers opened fire at a derelict building in William Street. They shot 5 rounds and injured Damien Donaghy(15) and John Johnston (59) ...read more.