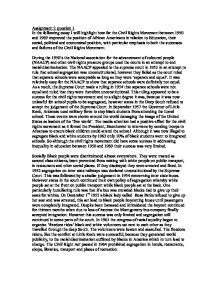 During the 1950’s the National association for the advancement of coloured people (NAACP) and other civil rights pressure groups used the courts in an attempt to end racial discrimination. The NAACP appealed to the supreme court in 1952 in an attempt to rule that school segregation was unconstitutional, however they failed as the court ruled that separate schools were acceptable as long as they were ‘separate and equal’. It was relatively easy for the NAACP to show that separate schools were definitely not equal. As a result, the Supreme Court made a ruling in 1954 that separate schools were not equal and ruled that they were therefore unconstitutional. This ruling appeared to be a success for the civil rights movement and to a slight degree it was, because it was now unlawful for school pupils to be segregated, however states in the Deep South refused to accept the judgement of the Supreme Court. In September 1957 the Governor of Little Rock, Arkansas used military force to stop black students from attending the Local school. These events were shown around the world damaging the image of the United States as leaders of the ‘free world’. The media attention had a positive effect for the civil rights movement as it forced the President, Eisenhower to intervene by sending troops to Arkansas to ensure black children could attend the school. Although it was now illegal to segregate black and white students by 1963 only 10% of black students went to integrated schools. So although the civil rights movement did have some success in addressing inequality in education between 1950 and 1969 their success was very limited.

Socially Black people were discriminated almost everywhere. They were treated as second class citizens, been prevented from mixing with white people on public transport, in restaurants and other social places. If they disobeyed they were arrested and fined. In 1952 segregation on inter state railways was declared unconstitutional by the Supreme Court. This was followed by a similar judgement in 1954 concerning inter state buses. However states in the south continued their own policy of segregation whereby white people sat at the front on public transport while black people sat at the back. One particularly humiliating rule was that if a bus was crowded blacks had to give up their seats for whites. On December 1st 1955 a black lady called  Rosa Parks refused to give up her seat and was arrested, this act lead to black people boycotting buses until passengers were completely integrated. Despite been harassed and intimidated the boycott continued for thirteen months when due to loss of income the Montgomery bus company finally accepted integration. However this success was only limited and segregation still continued in some parts of the south. In 1961 the congress of racial equality began to organise ‘freedom rides’ black and white volunteers sat next to each other as they travelled through the deep South. The volunteers were beaten and assaulted. The freedom riders, like the conflict at Little Rock were successful, because they generated world publicity, to the racial discrimination suffered by blacks in America which in turn lead to change. The Civil Right Act passed in 1964 prohibited segregation in hotels, restaurants, shops, libraries, transport and places of recreation.

In 1950 segregation was legal. Organisations such as the Ku Klux Klan, the White League and the Knights of the White Camelia existed with their main objective been to stop black people from voting this was in order to maintain ‘ white supremacy’ Successful black businessmen were attacked and any attempt to form black protection groups such as trade unions was quickly dealt with. In 1964 The Council of Federated Organizations launched a massive effort to register black voters. They began a march to Montgomery to support voting rights. The incident was dabbed ‘bloody Sunday’ by the media. The march was successful as it was considered the catalyst for pushing through the voting act five months later. Congress passed the voting right act of 1965 making it easier for southern blacks to register to vote. The right to vote established in 1965, gradually began to take effect. In 1963 there were less than 50 black elected officials in the South. By 1984 the number had grown to 3,498. In 1968 President Johnson signed the civil rights act of 1968 prohibiting discrimination in the sale, rental and financing of housing. Despite all this it was difficult to change attitude, white people continued to resist the new laws. Research carried out in 1960 showed that housing segregation was more common than it had been in 1950.

In 1950 black wages were on average only 61% of those paid to whites. Low wages and unemployment forced many black people to live in poor housing and in run down areas. Citizen councils set up by the whites all over the deep South made it impossible for black people who advocated desegregation to find jobs, get credit or renew a mortgage, they could do this as they controlled the money and had the power to do so. The Civil Rights Act of 1964 prohibited discrimination in employment and was important in the struggle for black equality. However discrimination is difficult to prove and changing the minds of people who thought of the blacks as slaves and second class citizens was not easy. In 1964 more black people were unemployed than in1954 and those with jobs still received lower wages. In reality discrimination in employment continued. Despair led to violence between 1964 and 1968, riots took place in 215 different cities, resulting in death and serious injury to hundreds of people, as a direct result of the despair and hopelessness felt by the African Americans

The Civil Rights Movement between 1950 and 1969 began a chain of events that were to cause positive changes in the way in which African Americans were treated. But the problems were immense and discrimination wide spread. The Civil Rights Movement lead to some success and improvement in the education, social, political and economic life of African Americans though this success was minimal even today inequality still exists to some extent.

The main tactic of the Civil Rights Movement had been to use the Courts to end racial discrimination this was successful as it led to many changes in the law. However the changes in the law did not result in changing peoples deep seated racism views and believes.