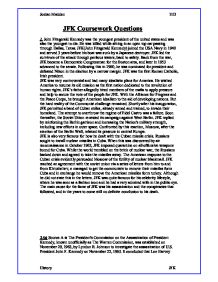 JFK Coursework Questions 1. John Fitzgerald Kennedy was the youngest president of the united states and was also the youngest to die. He was killed while sitting in an open top car passing through Dallas, Texas. JFK(John Fitzgerald Kennedy) joined the USA Navy in 1940 and served 3 years before his boat was sunk by a Japanese destroyer. JFK led the survivors of the attack through perilous waters, back to safety. Back from the war, JFK became a Democratic Congressman for the Boston area, and later in 1953 advanced to the senate. Following this in 1960, he was nominated for president and defeated Nixon in the election by a narrow margin. JFK was the first Roman Catholic, Irish president. JFK was very controversial and had many idealistic plans for America. He wished America to resume its old mission as the first nation dedicated to the revolution of human rights. JFK's father allegedly hired members of the mafia to apply pressure and help to secure the vote of the people for JFK. With the Alliance for Progress and the Peace Corps, he brought American idealism to the aid of developing nations. But the hard reality of the Communist challenge remained. ...read more.

He confuses us by putting the actual footage in colour and his own filming in black and white, in contrast to what we would expect. Stone uses a wide range of sources which adds to the reliability of the movie, although he is very selective with the information and evidence that he uses. Despite Stones anti-government perspective, he idolised JFK and thus the movie could be described as biased towards President Kennedy. 4. Sources C and D are the eye witness accounts of the JFK assassination. The eye witness account from Jean Hill is one of the less reliable accounts as quite a lot of her testimony is contradicted either by others claims, or claims that she later made about the assassination. Jean Hill's testimony is clearly in utmost agreement almost entirely with the conspiracy theory, whether it is true or false, the American government would never acknowledge that it could be true as it disagrees with the evaluation produced by the warren commission which is the accepted review of the assassination. Jean hill changes eight points she had made in ther account of the events of the assassination. The withdrawals and changes she made decrease the reliability of her account and make it seem weak and in some parts untrue. ...read more.

We then have source C which questions the whole ideology of whether it would have been plausible that Oswald did carry out the assassination as he was eating lunch fifteen minutes prior to the killing. The final source that either doesn't point towards conspiracy or indirectly suggest a conspiracy is source D which is the statement of Jean Hill who is not a reliable witness as she changes her story . The final 3 sources: E, F and G all directly point towards the idea of a conspiracy as the "magic bullet" theory is said to be implausible and impossible along with the fact that the "pristine bullet" is not believable as the bullet on the stretcher was not in pristine condition. Concluding the idea of a conspiracy is Source G the movie by Oliver Stone which is completely in agreement with the conspiracy theory that suggest the government was behind the assassination, although this is not reliable source as Stone used his dramatic licence to a ludicrous extent. All of the testimonies that argue with the warren commission and the fairly substantial evidence of conspiracy and the fact that witnesses are believed to have been intimidated into changing stories, all points towards the idea and theory that there was and is a conspiracy surrounding the assassination of JFK and that is what I myself believe. ?? ?? ?? ?? Jordan Madden 11D History JFK ...read more.