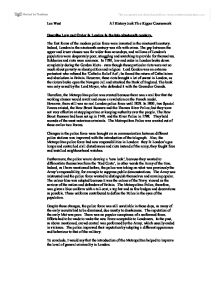 Describe Law and Order in London in the late nineteenth century. The first forms of the modern police force were invented in the nineteenth century. Indeed, London in the nineteenth century was rife with crime. The gap between the upper and lower classes was far wider than nowadays, and millions of London's population were desperately poor, struggling and snatching to provide for themselves. Robberies and riots were common. In 1780, law and order in London broke down completely during the Gordon Riots - even though these particular riots were not so much about poverty as about politics and religion: Lord Gordon was an extreme protestant who refused the 'Catholic Relief Act'; he feared the return of Catholicism and absolutism in Britain. However, these riots brought a lot of unrest in London, as the rioters broke open the Newgate Jail and attacked the Bank of England. The bank was only saved by the Lord Mayor, who defended it with the Grenadier Guards. Therefore, the Metropolitan police was created because there was a real fear that the working classes would revolt and cause a revolution on the French model. However, there still was no real London police force until 1829. In 1800, two Special Forces existed, the Bow Street Runners and the Thames River Police; but they were not very effective at stopping crime or keeping authority over the people. The Bow Street Runners had been set up in 1749, and the River Police in 1798. They held records of the most notorious criminals. The Metropolitan Police was created out of these earlier two Forces. Changes in the police force were brought on as communication between different police stations was improved with the introduction of the telegraph. ...read more.

Although the Victorians were known for being s******y repressed, the newspapers knew that people loved saucy, scandalous stories, the more explicit the better. There was also a suggestion that a prominent individual, such as a member of the Royal Family, could be to blame for the murders. This gave people opportunities to speculate endlessly, making the stories roll on for months. Indeed, Prince Charles William Edward, who suffered from syphilis, was suspected to have had a relationship with one or more of the prostitutes. Hence, the Royal Family might have wanted to cover up the evidence. The mutilation of the bodies would have been done deliberately to cover any pregnancies, and to frighten witnesses into silence. The fact that the Ripper was never caught added to the air of mystery and speculation around the case. The incompetence of the police made people want to take their own involvement in the case, possibly even thinking that they could do a better job solving it. I think that the main reason the Whitechapel murders attracted so much attention was a combination of all these reasons, making the murders a story that Britain would be unlikely to forget easily. The murders were horrific, prolific and bizarre - the mutilations seemed to be of a ritualistic nature. Prostitutes might have been murdered before, but it was the unusual characteristics of the crimes which we remember even today. But above all, I think that the press played a major role in giving these murders a high profile and in pushing the authorities to solve the crimes. Why were the police unable to catch Jack The Ripper? The months of August to November 1888 became infamous due to the notorious Ripper murders. ...read more.

One of the splits between the leadership of the two forces was over graffiti found in Gordon Street on the night of the 'double event'. There was a chalked message over the doorway near to where Eddowes was found, saying, "The Juwes are the men That Will not be Blamed for nothing." This may of course had been written by the Ripper and the City police officers wanted to photograph it. Chief constable of the Met police force Warren ordered it to be wiped off, in the fear that there would be an anti-Semitic onslaught upon the Jews of Whitechapel. There was already distrust in ethnic minorities from the residents, who believed the murderer was most likely a Jew. But this evidence could have been really important to the case, as in identifying the Ripper's handwriting. The case was made even more difficult for the police by the role of the press. Indeed, the press created several false starts or 'red herrings'. It suggested that Jews or immigrants were responsible for the murders. Press interest drove the police to look for a quick arrest rather than looking for the real cause of the murders. The popular press sustained a national interest in the cases, which contributed to an air of hysteria. The police arrested a number of suspects; all were subsequently released because of a lack of evidence or alibis. But in my opinion the main reason for the police incompetence to solve the murders, was a lack of scientific method and techniques in investigating the crimes. Modern police forces use a wide range of scientific techniques to collect evidence and evaluate its importance. However, I would like to point out that the problem of so-called 'serial killers' still exists today, despite the modern technology available. ?? ?? ?? ?? Lea West A1 History Jack The Ripper Coursework ...read more.