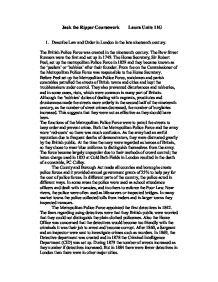 Jack the Ripper questions and answers.

Jack the Ripper Coursework Laura Unite 11G 1. Describe Law and Order in London in the late nineteenth century. The British Police Force was created in the nineteenth century. The Bow Street Runners were the first and set up in 1749. The Home Secretary, Sir Robert Peel, set up the metropolitan Police Force in 1829 and they became known as the 'peelers' or 'bobbies' after their founder. From the on the Commissioner of the Metropolitan Police Force was responsible to the Home Secretary. Before Peel set up the Metropolitan Police Force, watchmen and parish constables patrolled the streets of Britsh towns and cities and kept the troublemakers under control. They also prevented disturbances and robberies, and in some cases, riots, which were common in many part of Britain. Although the 'bobbies' duties of dealing with vagrants, prostitutes and drunkenness made the streets more orderly in the second half of the nineteenth century, as the number of street crimes decreased, the number of burglaries increased. This suggests that they were not as effective as they should have been. The functions of the Metropolitan Police Force were to patrol the streets to keep order and prevent crime. Both the Metropolitan Police Force and the army wore 'red-coats' so there was much confusion. As the army had an awful reputation due to frequent deaths of demonstrators, they were distrusted greatly by the British public. At the time the navy were regarded as heroes of Britain, so they chose to wear blue uniforms to distinguish themselves from the army. The force became largely unpopular due to their methods of crowd control; the baton charge used in 1833 at Cold Bath Fields in London resulted in the death of a constable, PC Culley. The County and Borough Act made all counties and boroughs create police forces and it provided annual government grants of 25% to help pay for the cost of police forces. ...read more.

He then called to a second man, who was on the other side of the road. Schwartz thought that the man was called Lipski. He then ran away because he thought he was going to be followed. Schwartz identified that the woman was Elizabeth Stride, and described both the men. The first man was about thirty years old, and five feet five inches tall. He had dark hair and a dark moustache, and was wearing a dark jacket, trousers and a black cap. The second man, he described, was thirty-five years old and five feet eleven inches tall. He had light brown hair and a moustache. He was wearing a dark overcoat and a black wide-brimmed hat. Finally, James Brown saw Elizabeth Stride talking to a man, although he guessed the time at 12:45am. The man was five feet seven inches tall and was wearing a long dark overcoat. Brown heard Elizabeth say, "Not tonight, some other night." Every one of Jack the Ripper's victims were found dead with their throats cut. However, Elizabeth Stride's body had not been mutilated like in all the other murders. This suggests that the Ripper had been disturbed and fled to avoid being caught. Not long after Stride's body was found, Police Constable Edward Watkins's discovered another body in Mitre Square barely a mile away. Watkins had passed through the square at 1:30am, but when he returned at 1:44am, he found a body lying in the corner. The police then searched the area for clues and found part of the woman's apron in Goulston Street in Whitechapel at 2:55am. On the wall above the apron, written in chalk were the words: The Juwes are The men That Will not Be Blamed For nothing The Commissioner of the Metropolitan Police Force, Sir Charles Warren, ordered the writings on the wall to be cleaned off, before they could be photographed and used as evidence. ...read more.

The first was Mr M. J. Druitt, a doctor and of a good family. He disappeared just after Mary Kelly was found dead, and his body was found in the Thames on 31 December 1888, after being in the water upwards of a month. He was sexually insane, and Macnaghten doubted that his family believed that he was the Ripper. The second was Aaron Kosminski, a Polish Jew and resident in Whitechapel. He became insane and hated women greatly, specially prostitutes. He had strong homicidal tendencies and was taken to a lunatic asylum in about March 1889. He was connected to many circumstances, which made him a strong suspect. The third was Michael Strogoff. He was a Russian doctor and a criminal, who was detained in a lunatic asylum as a homicidal maniac. This man's antecedents were of the worst possible type, and his whereabouts at the time of the murders could never be ascertained. Macnaghten drew the conclusions because he believed that the Ripper's final victim was Mary Kelly, because he was in some way prevented from continuing his work further. He believed the reason for this was he became completely deranged. His evidence for this was the way in which Mary Kelly had been murdered, which he thought would have taken about two hours. This made Druitt Macnaghten's prime suspect. After Macnaghten, many other people have tried to discover the identity of the Ripper. A popular suspect was Prince Edward Victor, a grandson of Queen Victoria. However, he had alibis for four of the five murders. At the time of May Kelly's murder he was having dinner with the Queen. Another suspect was Sir William Gull, a royal surgeon. Some people believed he might have murdered the women in his carriage to avoid being caught, although there is nm evidence to prove this theory. The most popular suspect was Francis Tomelty, an American. After the murder of Mary Kelly, he moved back to the USA, where similar murders were committed. However, despite more than a century of investigation, the identity of Jack the Ripper is still unknown. ...read more.