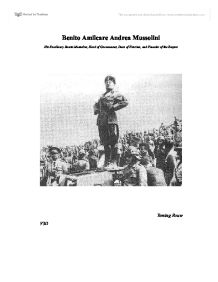 The manifesto told the people what the fascist party tries to reach. It was divided in 4 main sections: Political problems, Social Problems, Military problems and Financial problems. Some quotes4: Political "A minimum age for voting in electorate of 18 years; that for the office holders at 25 years." Social "A minimum wage" "A modification of the insurance laws to invalidate the minimum retirement age; we propose to lower it from 65 to 55 years of age" Military " Nationalization of all the arms and explosives factories " Financial " A strong progressive tax on capital that will truly expropriate a portion of all wealth A group of Fascists started to wear blackshirts, as a symbol for Fascism. He also brought back the Roman salute. It was a recognition of Fascism. They did this with the goal of restoring order to the streets of Italy with a strong hand. Later Hitler copied this salute and the black shirts became brown. The Fascist party grew so fast that they got the recognition as " National Fascist Party " In 1921, Mussolini was elected to the Chamber of Deputies for the first time along with 35 other party members5. ...read more.

This was a system in were a country was ruled by two political heads. In Italy's case, Benito Mussolini and the King, Victor Emmanuel. This system led Mussolini actually to be the most powerful man in Italy. Conclusion As I mentioned in the beginning of my thesis, I made this thesis about Benito Mussolini bases on a research question. I have tried to explain and tell the story on how Benito Mussolini has raised to power in Italy and briefly explained this with the help of two sub questions. Mussolini's mind of thinking was in his youth already very much influenced of the way he was been raised as a child. He got away to Switzerland on a very young age. Mussolini had hardly anybody there to support him, so he looked for help and ended up with some Italian Socialists which also had a lot of influences on him, this is how Benito Mussolini's character/mind was formed. Mussolini played a very smart game on his way to power in Italy, sometimes with a bit of violence though. Nowadays Italian people don't want to remind of Mussolini because he did a lot of harsh stuff to everyone who opposed him. ...read more.