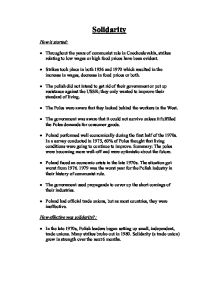 Notes on the Solidarity movement in Poland.

Solidarity How it started: * Throughout the years of communist rule in Czechoslovakia, strikes relating to low wages or high food prices have been evident. * Strikes took place in both 1956 and 1970 which resulted in the increase in wages, decrease in food prices or both. * The polish did not intend to get rid of their government or put up resistance against the USSR; they only wanted to improve their standard of living. * The Poles were aware that they lacked behind the workers in the West. * The government was aware that it could not survive unless it fulfilled the Poles demands for consumer goods. * Poland performed well economically during the first half of the 1970s. In a survey conducted in 1975, 60% of Poles thought that living conditions were going to continue to improve. Summary: The poles were becoming more well-off and were optimistic about the future. * Poland faced an economic crisis in the late 1970s. The situation got worst from 1976. 1979 was the worst year for the Polish industry in their history of communist rule. * The government used propaganda to cover up the short comings of their industries. ...read more.

For now it was hoping that Solidarity would split up into factions like other movements before it-making the government's job easy. * The Soviet Union was eyeing the West as Solidarity had made a big impression there (more then the incident in Hungry or Czechoslovakia). Walesa was frequently photograph and interviewed by the Western media and Solidarity logos were also mass produced in the form of posters, postcards and stickers throughout the Capitalist world. Clampdown: * In February 1981, the Civillian Prime Minister resigned and Jaruzelski took over (also head of Communist party). * People expected the USSR to 'send in tanks' at any moment. * March 1981: Walesa negotiated with Jaruzelski. He then called off a strike in Bydgoszcz (this made Solidarity members unhappy). * May 1981: Rural Solidarity was set up as a trade union for farmers. * September 1981: Lech Walesa became chairman of Solidarity. The Solidarity congress announced that they were also fighting for the rights of workers of the Communist bloc. * November 1981: Negotiations took place between Walesa and Jaruzelski to form a government. This resulted in the break down of 'international understanding'. ...read more.

* After the 1970s, the USA was, once again, becoming suspicious of the Soviet Union. American and other Western countries imposed trade and then economic sanctions on Poland. The currency devaluated twice and inflation reached 70%. * Solidarity, although never becoming a giant organization, greatly influenced the Polish society. In 1986, it threatened to call a nationwide strike against price increase. The government backed down. It worked closely with the Catholic Church. It broadcast radio Solidarity in 1986 and organized a boycott of the 1988 Polish elections. * Officials of foreign countries consulted Walesa as though he was the leader of the government and consulted him on easing economic sanctions. * In 1986, a new threat arose when Mikhail Gorbachev was appointed the new leader of the Soviet Union. * In March 1989, Mikhail Gorbachev told the people of Eastern Europe that they must listen to their people and that the USSR would no longer send troops to support Communist regimes. * Solidarity had been demanding open elections. In June 1989, Solidarity won nearly all seats it was up for. A Solidarity leader, Tadeuz Mazowiecki became Prime Minister. In 1990, Walesa became the first non-Communist President of Poland since before the Second World War. ...read more.