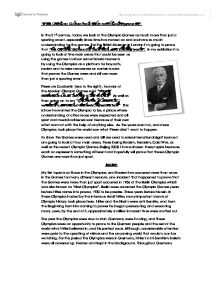 Olympics More Than Just A Sport

In the 21st century, today we look at the Olympic Games as much more than just a sporting event, especially since time has moved on and we have so much understanding for the games. For the British Museum in London I'm going to prove that "The Olympic Games are more than just a sporting event". In my exhibition I'm going to look at five main areas that could be seen as using the games to show some historic moments by using the Olympics as a platform for boycotts, r****m and to raise awareness on certain issues that proves the Games were and still are more than just a sporting event. Pierre de Coubertin (see to the right), founder of the Modern Olympic Games said "Racial distinctions should not play a role in sport." As well as then going on to say "Sport is the habitual and voluntary cultivation of intensive physical effort." This is how he wanted the Olympic to be, a place where understanding of other races were respected and all sport and medal achievers won because of their own effort and not with the help of anything else. As the years went on, and more Olympics took place the world saw what Pierre didn't want to happen. To show the Games were used and still are used to raise international significance I am going to look at four main areas, these being r****m, Terrorism, Cold War, as well as the recent Olympic Games, Beijing 2008. I have chosen these topics because each on represents something different and hopefully will prove that theses Olympic Games are more than just sport. r****m My first topic is on Race in the Olympics, and r****m has occurred more than once in the Games for many different reasons, one incident that happened to prove that the Games were more than just sport occurred in 1936 at the Berlin Olympics which was also known as "n**i Olympics". ...read more.

In 1953, Joseph Stalin, former Russian leader died, and in 1956 Khrushchev became the communist leader. He was harsher towards the American ways and their demands to change than Stalin, as everyone had the impression that their new leader would be fairer, but he wasn't. Because America was a capitalist country, and Russia and many Eastern block countries were Communist, both sides thought each other ruled over the country the wrong way, and both wanted to change so they could rule over their countries the same way. This meant his was more forceful on many Eastern Europe countries. He made the Hungarian leader Rakosi resign, and made Hungry have a bad year as of the bad harvest, fuel shortages and many other points. In fact, because of this, in October of 1956 many Hungarian Citizens took the streets of Budapest, the capital and began to protest for their freedom, more food, the removal of Russian control and secret police. Poland, who were also under Communist Russia had already protested and been granted more rights, so Hungry followed likewise because they thought their new leader would be fairer, but obviously he wasn't . Although, whilst Hungary was rebelling and the Hungarian Uprising had just begun, the 1956 Melbourne Games were just round the corner. Except by now, the Soviet Army had already killed 5,000, and nearly had half the population flee. By now, the Olympic had begun, and water polo, one of Hungary's best sports was underway and they made it into the finals. At the Melbourne games, who were Hungary met in the finals of water polo? But their rivals Russia. Here, what the world was about to see would be one of the most violent, politically charged encounters in Water Polo match history. As the Hungarian and Soviet Union players took to the water, and the game was underway, the game turned itself more than a match of sport, but a match of memorable, physical and political effort. ...read more.

Although these stages of the Torch relay were shown through News television channels and Newspapers, making the world known, Website were also set up in protest, making a worldwide view of this. To get people around the world take what was happening more serious, the website changed Beijing's Olympic Games slogan to "Lose the Propaganda, Share the Truth". What was all this for? For the Human rights act of China, and protests and Olympic Torch boycotts were made because of this. China's government at the moment stands as not letting China have their own say. http://torchrelaybeijing2008.org stated on their website "One World, One Dream" is China's Olympic slogan. But the reality of China's occupation of Tibet is a nightmare. Right now thousands of Tibetans are being arbitrarily detained, beaten and killed for speaking out for freedom. At a time when Tibetans are living under a climate of fear and being detained, beaten and killed for peaceful protests, parading the torch through Tibet will only provoke tensions and lead to further suffering." Throughout the history of the Modern Olympics, the Olympics is certainly much more than just sport, it happened in the past, making significant plots in history, and today, this year's Olympics, part of it showed it was more than just sport, Beijing 2008 showed many protest against the China Government, and wanted them to change many ways, and because of their ways not to change, Boycotts were planned on their torch relay to show them and the world, that these Free Tibet campaigners did not find it acceptable, and the only way to show this, and to show the world how bad it had got, the Olympic Torch Relay was taken over by protestors making a political statement to the whole world. This is why the Beijing Olympic Games were more than just sport, but it was used to show how China could put on the best Olympics in history and to show the world that they were wrong to get these games because of their Human Rights. ...read more.