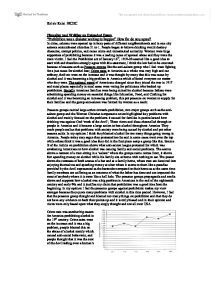 Prohibition was a disaster waiting to happen How far do you agree? I feel the Prohibition act of January 16th, 1919-20 seemed like a good idea to start with and therefore strongly agree with this statement, I think the law had to be executed becaus

Planning and Writing an Extended Essay "Prohibition was a disaster waiting to happen" How far do you agree? In cities, saloons were opened up in busy parts of different neighbourhoods and in one city saloons outnumbered churches 31 to 1. People began to believe drinking would destroy character, corrupt politics, and cause crime and unrestrained sexuality. Women were huge supporters of prohibiting because it was a leading cause of spousal abuse and they were the main victim. I feel the Prohibition act of January 16th, 1919-20 seemed like a good idea to start with and therefore strongly agree with this statement, I think the law had to be executed because of reasons such as Pressure groups like the anti-saloon group who I feel were fighting for a just cause for alcohol ban; Crime rates in America as a whole was very high and car robbery, theft etc were on the increase and it was thought by many that this was cause by alcohol and it was becoming a big problem in America which affected everyone no matter who they were. The national mood of Americans changed since they joined the war in 1917 and most places especially in rural areas were voting for politicians who backed up prohibition. ...read more.

The pressure groups propaganda and media shows and supports how alcohol was a big problem in American in the end of the eighteenth century and early 90s and it justifies my claim that prohibition was a good idea from the beginning. In my opinion I feel the pressure groups against prohibition makes my view stronger because they quote many problems with alcohol in this time period. However, I feel that the pressure group thought and blamed too many things on prohibition and that they do not have any evidence to back their points up and it is truly biased and in their opinion and views were only based upon what they singly thought and not all over USA. Crime rate was another big reason for America prohibiting alcohol in the 19th century. Crime rates were on the increase and it was a big problem, people blamed this on the abuse of alcohol mainly which caused anti-social behaviour, and people thought that it was the root of the devil taking over a human's body. This Source describes prison population increasing up to the point of 1919 when 75% of states Of America prohibited alcohol. This shows that presidents and the government were coming under pressure to tackle this problem crime rate which was affecting American lives every single day. ...read more.

Alcohol ban was a heard message and even by celebrities like John D. Rockfeller who donated seventy five thousand dollars each year to pressure groups on alcohol. This shows important people such as celebrities would put money and other benifits away for a just cause which they found was the ban of alcohol In conclusion, I do still believe prohibition was a good idea and was not a disaster waiting to happen but instead a good idea. I feel these subsection arguements have made my arguement stronger as a whole and i feel they justify that alcohol ban was a good idea. We know that prohibition failed and crime rates increased, but from looking at this from a presidents view makes it the only nonprobibale answer. I feel prohibition did some effect of american society which was a main problem with the consumption of alcohol and family life improved as a outcome even if it was replaced by increased crime rates and more disasterous problems continuing in the 1930s. Overall, prohibition was a good idea and it was going to succseed as an outcome of predictions carried out by the state. Cartoons from the period of time show both sides of my arguement which vary with indivual opinions and thoughts. ?? ?? ?? ?? Kalvir Kalsi 10CDC ...read more.