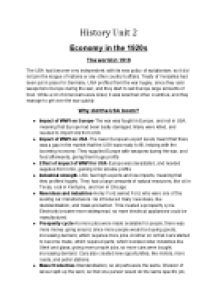 ﻿History Unit 2 Economy in the 1920s The world in 1919 The USA had become very independent, with its new policy of isolationism, so it did not join the league of nations or any other country's affairs. Treaty of Versailles had been put in place for Germany. USA profited from the war hugely, since they sold weapons to Europe during the war, and they start to sell Europe large amounts of food. While a lot of Americans were killed, it was less than other countries, and they manage to get over the war quickly. Why did the USA boom? * Impact of WW1 on Europe-The war was fought in Europe, and not in USA, meaning that Europe had been badly damaged. Many were killed, and needed to import lots from USA * Impact of WW1 on USA-The lower European export levels meant that there was a gap in the market that the USA was ready to fill, helping with the booming economy. They supplied Europe with weapons during the war, and food afterwards, giving them huge profits * Effect of impact of WW1 for USA-Europe was devastated, and needed supplies from USA, gaining USA sizable profits * Industrial strength-USA had high exports and low imports, meaning that they profited hugely. They had a large amounts of natural resources, like oil in Texas, coal in Kentucky, and Iron in Chicago * New ideas and industries-Henry Ford owned Ford, who were one of the leading car manufacturers. He introduced many new ideas, like standardisation, and mass production. This created a prosperity cycle. Electricity became more widespread, so more electrical appliances could be manufactured. * Prosperity cycle-As more jobs were made available for people, there was more money going around, since more people would be buying goods, increasing demand, which requires more jobs. Another on is that Cars started to become made, which required parts, which boosted older industries like Steel and glass, giving more people jobs, so more cars were bought, increasing demand. ...read more.

People had lost their confidence in the stock market, and everyone rushed to sell all of their shares. Economic consequences of the Wall Street Crash Banks-When the stocks crashed, people panicked and had a 'run on the banks'. The banks were small, and not large chains like they are today, and so could not afford to give all the money they owed people. This meant that people lost their money, and that led to them not paying back their debts to the bank, so the banks would take their homes away from them. 5000 banks went out of business by 1933. Hoover was optimistic about this, and did nothing. Business-Unemployment was very widespread, so people had no money to spend on luxury goods, and the people who did have money did not want to spend it on goods. This caused many businesses to go out of business, leading to even more unemployment. The economy had stopped moving. Industrial production dropped by 45% between 1929 and 1932. Hoover kept faith in republican ideas, but did spend 1.8 billion on building and repairing roads and dams. Citizens-Due to widespread unemployment, people could not afford food, and many had to line up for hours to get it from soup kitchens. There was a 25% unemployment rate, and William Randolph Hearst owned the biggest bread line in New York, where the line would go on for blocks and blocks and blocks. Hoover did cut taxes by $150 million, and claimed that prosperity was right around the corner. Social Consequences of the Wall Street Crash Unemployment-After the Wall Street Crash, people were very protective of the little money that they had, and were not spending it on luxury goods. This meant that businesses were getting very little money, and so they had to fire many workers. These people had very little money, and no home. Some men would go on freight trains to travel around the country, who were called hobos, but this was quite dangerous, and 6500 hobos were killed in train accidents, or by railroad 'bulls' who were violent men employed to stop hobos. ...read more.

If peopel retired at 60 there would be more jobs for unemployed. 2% tax on business transactions would allow for this SSA-introduced pensions for over 65s, but Townsend wanted $200 per month for all over 60 Old age revolving pension plan, AKA townsend clubs, attracted 5 million members by 1935 Huey Long Roosevelt had failed to share out nations wealth, and so introduces own plans. Felt alphabet agencies weren't good enough EBA-didn't favour poor people, and was against it Agreed with them, but thought they should have done more No opponent was more dangerous (according to himself) Got 7.5 million votes in 1936 election. Share out wealth clubs The Supreme Court The role of the supreme court is to keep a check on Congress and the President, and making sure that everything that they do is constitutional. When a judge is appointed, they are appointed for life, meaning that it generally goes from being republican, to being democrats, and back again. Judges only leave when they die or retire, and they pretty much never retire. The supreme court during the 1930s was mainly made up of Republicans, which caused nothing but problems for Roosevelt. From 1935-36, the supreme court declared 11 New Deal measures unconstitutional, and blocked them, with two famous cases: The Sick Chickens case, 1935, and The US vs. Butler case, 1936. The Sick Chickens case: The Schechter brothers were selling diseased chickens which were unfit for consumption, and the NIRA was trying to stop them. The Schechters took NIRA to court, claiming that it was the state's responsibility to do that, and not NIRA's, and the supreme court actually ruled in favour of the Schechters The US vs. Butler Case:AAA declared unconstitutional for overriding state poweres, similar to the sick chickens. It is the state that has the responsibility to give bonuses for killing livestock, and not the federal government, and was against the 10th commendment. ...read more.