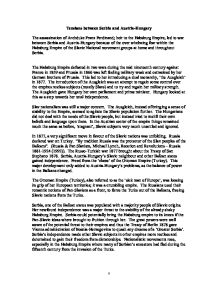 Tensions between Serbia and Austria-Hungary The assassination of Archduke Franz Ferdinand; heir to the Habsburg Empire, led to war between Serbia

Tensions between Serbia and Austria-Hungary The assassination of Archduke Franz Ferdinand; heir to the Habsburg Empire, led to war between Serbia and Austria-Hungary because of the over whelming fear within the Habsburg Empire of the Slavic National movement groups at home and throughout Serbia. The Habsburg Empire defeated in two wars during the mid nineteenth century against France in 1859 and Prussia in 1866 was left feeling military weak and ostracized by her German brothers of Prussia. This led to her introducing a dual monarchy, 'the Ausgleich' in 1877. The introduction of the Ausgleich was an attempt to regain some control over the empires restless subjects (mostly Slavs) and to try and regain her military strength. The Ausgleich gave Hungary her own parliament and prime minister. Hungary looked at this as a step towards her total independence. Slav nationalism was still a major concern. The Ausgleich, instead of bringing a sense of stability to the Empire, seemed to agitate the Slavic population further. ...read more.

Serbia, one of the Balkan states was populated with a majority people of Slavic origins. Her newfound independence was a major threat to the stability of the already shaky Habsburg Empire. Serbia could potentially bring the Habsburg empire to its knees if the Pan-Slavic ideas where brought to fruition through her. The great powers were well aware of the potential threat to their empires and thus the Treaty of Berlin 1878 gave Vienna administration of Bosnia-Herzegovina to quash any dreams of a 'Greater Serbia'. Serbia's independence made other Slavic subjects in other empires more restless and determined to gain their freedom from dictatorships. Nationalistic movements rose, especially in the Habsburg Empire where many of Serbian's ancestors had fled during the fifteenth century from the invasion of the Turks. Relative peace lasted until Serbia's new monarch; Peter Karajordjevic's (1903) democratic approach spread throughout the Balkans. Serious rioting began. Nationalist organizations were formed, notably the 'Black Hand'. The Black Hand organization wanted to unite all Serbian subjects, many of whom resided within the Habsburg Empire. ...read more.

'Hotzendorff was so concerned with a Serbian threat that in 1913 and 1914, he asked the imperial government twenty four times to be allowed to wage a defensive war against the southern neighbour'. (Martyn Housden, 'The past of the present - Yugoslavian Hostage of History' (History Review, March 1992). The unification of the Balkan league (Greece, Montenegro, Bulgaria, Serbia) and the Balkan wars saw Serbia's confidence grow, doubling in size within a year, to the further detriment of the Ottoman Empire and she was posing as an even greater threat to the Habsburg Empire than before. Serbian nationalist movements had gone too far for Austria-Hungary to regain control. The Habsburg Empire had 'abandoned themselves to a chivalrous mood of decline' but wished to go down fighting, as only a Neanderthal leadership knows how. The Habsburg Empire could not declare war on Serbia because it was losing control of it own subjects, they needed a viable reason to wage war. The shot that killed Archduke Franz Ferdinand provided that viable reason. The insurmountable ultimatum given to Serbia was merely procedure, war was already inevitable. ?? ?? ?? ?? 1 ...read more.