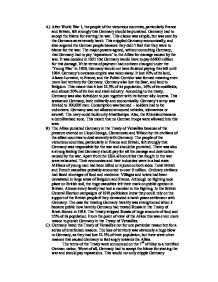 The Allies punished Germany in the Treaty of Versailles because of the pressure exerted on Lloyd George, Clemenceau and Wilson by the civilians of the allied countries to deal severely with Germany

A) After World War 1, the people of the victorious countries, particularly France and Britain, felt strongly that Germany should be punished. Germany had to accept the blame for starting the war. This clause was simple, but was seen by the Germans as extremely harsh. This crippled Germany economically, and also angered the German people because they didn't feel that they were to blame for the war. The major powers agreed, without consulting Germany, that Germany had to pay 'reparations' to the Allies for damage caused by the war. It was decided in 1921 that Germany would have to pay �6600 million for this damage. If the terms of payment had not been changed under the 'Young Plan' in 1929, Germany would not have finished paying this bill until 1984. Germany's oversees empire was taken away. It lost 10% of its land, Alsace-Lorraine, to France, and the Polish Corridor was formed meaning even more lost territory for Germany. Germany also lost the Saar, and land to Belgium. ...read more.

Their economies and their industries were in a bad state. Millions of young men had been killed or injured on both sides. Total British and French casualties probably amounted to over 9 million. Ordinary civilians had faced shortages of food and medicine. Villages and towns had been devastated in large areas of Belgium and France. Although no fighting took place on British soil, the huge casualties left their mark on public opinion in Britain. Almost every family had lost a member in the fighting. In the British General Election campaigns of 1918 politicians knew they could rely on the support of the British people if they demanded a harsh peace settlement with Germany. The case for treating Germany harshly was strengthened when it became public how harshly Germany had treated Russia in the Treaty of Brest-litovsk in 1918. The Treaty stripped Russia of huge amounts of land and 25% of its population. From the point of view of the Allies this was even more reason to punish Germany in the Treaty of Versailles. ...read more.

They called the Treaty a 'Diktat', a dictated or imposed peace. They were outraged that they had not been invited to the Paris Peace Conference. When they were not invited to join the newly formed League of Nations this was further evidence of unfair treatment. The fact that Germany lost so much territory because of the Treaty angered them. In 1919 many Germans did not really understand how bad Germany's military situation had been at the end of the war. They believed that the German Government had simply agreed to a ceasefire, and that therefore Germany should have been at the Paris peace conference to negotiate peace. It should not have been treated as a defeated state. They thought that they were being forced to accept a harsh treaty without any choice or even a comment. The fact that Germany had to accept the blame for starting the war, and all the implications that the treaty applied on Germany added to the sense of anger and defeat that most German's felt. The German's naturally blamed the crashing of their economy on the Treaty which had left them feeling humiliated and outraged and left Germany militarily weakened and economically crippled. ...read more.