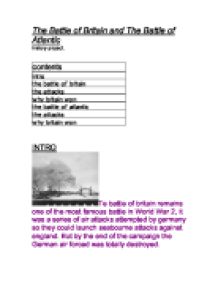 The Battle of Britain and The Battle of Atlantic history project. INTRO Te battle of britain remains one of the most famous battle in World War 2, it was a series of air attacks attempted by germany so they could launch seabourne attacks against england. But by the end of the campaign the German air forced was totally destroyed. it was a huge turning point because it meant that germany could not invade england with any hopes of sucess until it rebuilt its airforce-which never ended up happening. the battle of atlantic was about Britain needing to import food,raw materials,weapons, troops from the Dominions,colonies,and Allies.Supplies,weapons,troops had to be sent out from Britain to different fronts around the world. All these things had to be sent/received by sea, and the Battle of the Atlantic was the attempt by Germany to close off the main supply route to and from Britain - the troops, raw materials,weapons from Canada and USA, food and raw materials from South America - which was across the Atlantic Ocean. This was the most important battle of the war; if the Allies had lost, Britain would have been starved into surrender. _________________________________________ In the late May 1940, British troops evacuated Dunkirk and left France to open to the Germans. ...read more.

The RAF had shown that they had superior air power and now controlling the day skies over Britain. Sealion was postponed and was never put into action. Instead the Germans turned to a different tactic of destroying Britain's supplies from the USA and other countries by sea. And The Battle of the Atlantic begun. _________________________________________ The Battle of the Atlantic was the longest campaign of the Second World War. In a hard-fought and intense struggle to cut off Britain's sea supply lines. Germany's mobilized submarines (or U-boats), battleships, battle cruisers, aircraft and mines against Allied merchant shipping. Substantial British, Canadian and American naval and air forces were made to defeat this challenge. By far the biggest danger came from the U-boat. Success in this struggle went back and fro. Escorted convoys-which the British used from the early days of the war, proved difficult targets for single submarines. The Germans then developed attacks by groups of submarines- wolf packs. These packs were called together when a lone U-Boat sighted a convoy. The submarines then shadowed the convoy on the surface by day. At night the wolf pack would strike from all points with huge amounts of damage. ...read more.