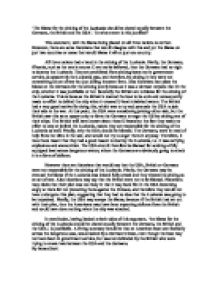 The blame for the sinking of the Lusitania should be shared equally between the Germans, the British and the USA. To what extent is this justified?

'The blame for the sinking of the Lusitania should be shared equally between the Germans, the British and the USA'. To what extent is this justified? This statement, with the blame being placed on all three nations is correct. However, there are some historians that would disagree with this and put the blame on just two countries or some that would blame it all on just one country. All three nations had a hand in the sinking of the Lusitania. Firstly, the Germans, if books, such as the one in source C are too be believed, then the Germans had no right to destroy the Lusitania. ...read more.

At this point, the USA were considering joining either side, but the British saw this as an opportunity to force the Germans to anger the US by sinking one of their ships. The British will have known about these U-boats but the fact they made no effort to stop or defend the Lusitania, means they are responsible for the sinking of the Lusitania as well. Finally, why the USA should be blamed. The Germans, were in need of help from the USA in the war, and would not try to anger them in anyway. Therefore, it must have meant that they had a good reason to destroy the Lusitania, i.e. ...read more.

Finally, the USA may escape the blame, because if the British had set out with their plan, then the Americans may have been expecting defence from the British and could have done nothing when the ship was attached. In conclusion, having looked at both sides of this argument, 'the blame for the sinking of the Lusitania should be shared equally between the Germans, the British and the USA', is justifiable. A fitting summary would be that an American boat sent foolishly across the dangerous seas, was attacked by a German U-boat, even though the boat may not have been in government service, but was not defended by the British who were trying to create hate between the USA and the Germans. By James Scott ...read more.