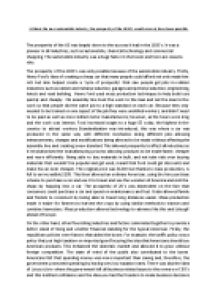 The boom of the 1920's would scarcely have been possible without the automobile industry. Discuss

The original price was $1200 but thanks to mass production, is fell to an incredible $295. This then allowed an ordinary American, using the hire purchase scheme to purchase a car and use it to travel and see the wonders of America and visit the shops by hopping into a car. The prosperity of 20?s was dependent on the fact that consumers could purchase a car and spend on maintenance and fuel. It also allowed family and friends to reconnect by being able to travel long distances easier. Mass production made it easier for farmers to harvest the crops by using similar methods to tractors and combine harvesters. Mass production allowed technology to advance like this and ?plough? ahead of Europe. On the other hand, other flourishing industries and factors culminated together to provide a better stand of living and a better financial standing for the typical American. ...read more.

In my opinion, the boom occurred for many reasons and they coincidently happened at the same time. Firstly, Europe was struggling to get back on its feet after the war and that allowed American agriculture to blossom during the 5 years after however once Europe could produce again, Henry Ford developed mass production which, in no doubt, played an enormous part in the boom however it was aided by the fact that Americans were spending more, there was little restriction and tax on businesses. These factors culminated to form the largest and most significant economic growth the world has ever seen. Therefore I partially agree with the statement that the boom was scarcely possible without the automobile industry because its impact on the manufacturing process and impact on the typical American however it wouldn?t have thrived as much without the policies and mind-set of the public. ...read more.