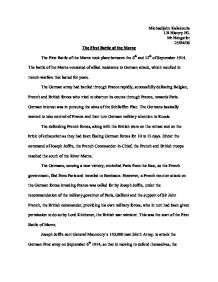 The First Battle of the Marne

Michaeljohn Kalakoutis I.B History HL Mr Hengstler 25/04/06 The First Battle of the Marne The First Battle of the Marne took place between the 6th and 12th of September 1914. The battle of the Marne consisted of allied resistance to German attack, which resulted in trench-warfare that lasted for years. The German army had battled through France rapidly, successfully defeating Belgian, French and British forces who tried to obstruct its course through France, towards Paris. German interest was in pursuing the aims of the Schlieffen Plan. The Germans basically wanted to take control of France and then turn German military attention to Russia. ...read more.

Gallieni and the support of Sir John French, the British commander, providing his own military forces, who in turn had been given permission to do so by Lord Kitchener, the British war minister. This was the start of the First Battle of Marne. Joseph Joffre sent General Maunoury's 150,000 man Sixth Army, to attack the German First army on September 6th 1914, so that in moving to defend themselves, the Germans would leave a 30mile wide gap between their First and Second Army. The German Second army, led by General Karl von Bulow, was consequently attacked by the French Fifth army, whilst the BEF (British Expeditionary Force), as well as the French Fifth army pured through the gap in the German lines of defence. ...read more.

On September 9th the German Chief of Staff, Helmuth von Moltke, order a German retreat as he feared an allied breakthrough due to poor German communications at the Marne. The allies subsequently chased the Germans, albeit at a slow pace, covering a mere 12 miles a day, until the Germans were driven 40 miles away to a point north of the River Aisne, where the German First and Second armies prepared trenches. This signaled a French strategic victory on September 10th, as, assisted by the British, the French forces had broken German hopes of swiftly defeating the West. German and French casualties in the First Battle of the Marne were approximately 250,000 soldiers each, with British casualties totaling 12,733 casualties. ...read more.