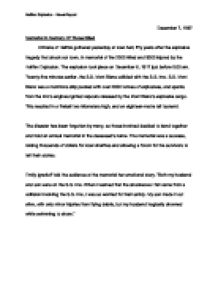 The Halifax Explosion of 1917

December 7, 1967 Memorial In Memory Of Those Killed Citizens of Halifax gathered yesterday at town hall, fifty years after the explosive tragedy that shook our town, in memorial of the 2000 killed and 9000 injured by the Halifax Explosion. The explosion took place on December 6, 1917 just before 9:05 am. Twenty-five minutes earlier, the S.S. Mont Blanc collided with the S.S. Imo. S.S. Mont Blanc was a munitions ship packed with over 2600 tonnes of explosives, and sparks from the Imo's engines ignited vapours released by the Mont Blanc's explosive cargo. ...read more.

Emily Ignatieff told the audience at the memorial her emotional story. "Both my husband and son were on the S.S. Imo. When I learned that the shockwave I felt came from a collision involving the S.S. Imo, I was so worried for their safety. My son made it out alive, with only minor injuries from flying debris, but my husband tragically drowned while swimming to shore." "I was at home getting ready to walk to work when I heard the explosion from Cape Breton," Bill Irwin recalls. ...read more.

The accident remains to this day the world's largest man-made accidental explosion. After the explosion, Medical aid stormed in throughout the country in order to help the wounded. The hospitals were filled in no time. By afternoon, doctors and nurses from Amherst, Truro, Kentville and New Glasgow came to Halifax. The trains they arrived on left loaded with casualties and refugees heading away from the horror. The destruction from the explosion was enormous. With over 12000 buildings severely damaged and 2000 completely destroyed, 6000 people were completely homeless. 30 shelters sprang up around Halifax, but many people just stayed anywhere they could find a warm dry place. ?? ?? ?? ?? Halifax Explosion - News Report Halifax Explosion - News Report ...read more.