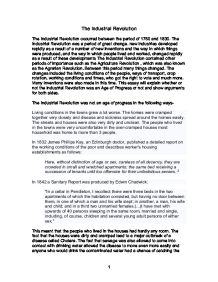 Transport was improved significantly considerably - canals, trains and roads were invented. The invention of canals made transportation of goods a lot easier and quicker. Before the goods were transported using carts and rivers. When canals were invented a type of boat with a flat bottom, called a barge, was used in the canals. The barges were a lot quicker and larger than the carts and were very cheap to run and maintain. A barge only required two people to run it. The fact that barges were quicker, bigger and very cheap to run made them an alternative for carts. An average barge could carry 50 tonnes of coal while the largest cart could only carry 2 tonnes. Between 1791 and 1791 42 canals were made. They cost around �6 million. By the time of 1840 4000 miles of canals were accessible. Rivers were also difficult to use because none of the coal mines were close to the sea or any rivers. This was a massive difference. Barges could also transport a large amount of people very quickly and for a very good price. Trains were developed after the invention of the steam engine. The trains were first used to transport goods for the factories faster, cheaper and in larger quantities than ever before. ...read more.

exports �45,000 �30 million Inventions of machines such as the flying shuttle and the spinning jenny also played a part in the industrial revolution. These helped the domestic workers as well as the factories workers by speeding up the production of cotton and the quality and width of the cloth that was produced. Steam power lead to the development of the train as well as replacing water as power in the factories. It was more efficient than water power as well as more convenient. The invention of the water frame which changed the way factories where powered by replacing horses. The main advantage of water power over horse power was that it was cheaper. It was also more reliable as the horses would get tired, and would also die after a number of years. The revolution also changed who was able to vote. Before the revolution only allowed certain people to vote but the qualities that the voters required to vote was relaxed and so many more people got the right to vote. Personally I think that the Industrial Revolution WAS an Age of Progress since the effects it had on England were mainly more positive rather then negative. The period also paved the way to the British Empire. ?? ?? ?? ?? 1 ...read more.