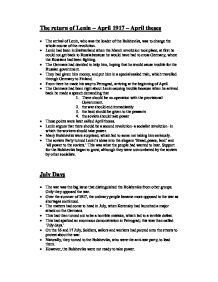 The return of Lenin

The return of Lenin - April 1917 - April theses * The arrival of Lenin, who was the leader of the Bolsheviks, was to change the whole course of the revolution. * Lenin had been in Switzerland when the March revolution took place, at first he could not get back to Russia because he would have had to cross Germany, where the Russians had been fighting. * The Germans had decided to help him, hoping that he would cause trouble for the Russian government. * They had given him money, and put him in a special sealed train, which travelled through Germany to Finland. * From there he made his way to Petrograd, arriving at the beginning of April. * The Germans had been right about Lenin causing trouble because when he arrived back he made a speech demanding that 1. There should be no-operation with the provisional Government. 2. the war should end immediately 3. the land should be given to the peasants 4. ...read more.

Autumn 1917- the Kornilov revolt - a second chance. * Events had started to work in the Bolsheviks favour. * Kerensky had appointed a general called Kornilov to be head of the army. * Kornilov had decided to deal with the revolutionaries once and for all and to establish strong government in Russia - his own Government. * He ordered his Cossack troops to march on Petrograd. * The people in Petrograd panicked; there was bound to be bloodshed. * Kerensky also panicked and asked the Bolsheviks for their help. * He gave rifles to the Bolsheviks Red Guard, groups of workers who had been training secretly, and who now appeared on the streets to help defend the city. * However, the troops had never arrived. * The railway workers had stopped the trains carrying the troops, and workers begged them not to fight their fellow Russians. * However, the Red Guard kept their rifles. The time is right - October 1917 * The Bolsheviks were now the 'savours' of Petrograd, and their support was at all-time high. ...read more.

* The Red guards took control of the bridges, the main telegraph office, the railway stations and the power stations. * They carried on seizing key places, such as the state bank. However, it all seemed to be normal. * The shops and factories were open and trams were running. * Kerensky had left the city in a car lent by the American Embassy, and never returned. Bolsheviks storm in winter palace * The Bolsheviks now moved in on the Winter Palace, where the Provisional Government were meeting. * Most of the Cossacks had slipped out of the palace, leaving some Military cadets and the women's death battalion. * At 9.00p.m the Aurora fired a blank shot to start the attack. There was little machine-gun fire, and very little damage was done to the palace. * The women's death battalion offered no resistance, came out and had gone back to camp. * The red guards then entered and made their way along the miles of corridors. * When they did meet the military cadets, they had given up, and so did the Provisional Government when the red guards had found them. * The Bolsheviks had control of Petrograd. ...read more.