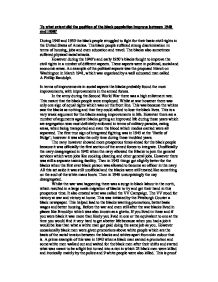 To what extent did the position of the black population improve between 1940 and 1950?

To what extent did the position of the black population improve between 1940 and 1950? During 1940 and 1950 the black people struggled to fight for their basic civil rights in the United States of America. The black people suffered strong discrimination in terms of housing, jobs and even education and travel. The blacks also sometimes suffered physical racial attacks. However during the 1940's and early 1950's blacks fought to improve the civil rights in a number of different aspects. These aspects were in political, social and economic areas. An example of the political aspects was the proposed March on Washington in March 1941, which was organised by a well educated man called A Phillip Randolph. In terms of improvements in social aspects the blacks probably found the most improvements, with improvements in the armed forces. In the army during the Second World War there was a high enlistment rate. This meant that the black people were employed. Whilst at war however there was only one sign of equal rights which was on the front line. This was because the whites saw the blacks as nothing and that they could afford to lose the black lives. This is a very weak argument for the blacks seeing improvements in life. ...read more.

There was a number of different events which were seen as good in the blacks eye, these were the proposed march on Washington 1941, The Congress of Racial Equality, The Committee on Civil Rights the National Association for the advancement of Coloured people and a man called James Farmer was also respected for what he did for the Civil Rights advancement. In 1940 the population of blacks working for the armament Industries was miniscule, in fact only 10% of the blacks were working for these industries and this was whilst the war was going on. So a commission called the Fair Employment Practices Commission was set up to gain equality in the opportunities in jobs for the blacks. This did have some effect because there was a 25% increase in jobs involving working with steel and iron. However although the FEPC was set up to help employment chances for black people there was probably a 99.9% that this had not changed any of the white employers minds and beliefs because they had been raised to hate the black man and to think they are below them. So in 1941 a man called A. Phillip Randolph, the president of The Brotherhood of Sleeping Car Porters (Black Trade Union), proposed a march on the nation's capital Washington. ...read more.

Due to the second world war a huge amount of blacks were employed due to the FEPC and its policies but it was also to do with the fact that more weapons and ammunition and basic requirements for a war were needed more than ever. Thus blacks were given jobs. However when the war had ended these jobs would no longer be needed thus the blacks lost them and once the white soldiers came back the blacks would struggle to get a decent job. In terms of education the blacks had it hard. $179 was spent on every single white person in school whereas only $43 was spent a a black child. The schools were also worse than the whites. The chances were that a black child would have to walk to school and sometimes it would be a couple of miles to their nearest one. The teaching was 20% worse than in a white school thus blacks never had a fair chance to get a good education and therefore job and life in general. As you can see in all three topics the blacks did find some improvements but in comparison it was very little to what was still going on. There for as my conclusion I think that the blacks were still along way away from racial equality but had found good foundations for achieving racial equality. ...read more.