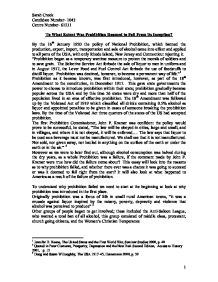 To What extent was Prohibtion doomed to fail from its inception?

To What Extent Was Prohibition Doomed to Fail From its Inception? By the 16th January 1920 the policy of National Prohibition, which banned the production, export, import, transportation and sale of alcohol came into effect and applied to all parts of the USA, with only Rhode Island, New Jersey and Connecticut rejecting it. "Prohibition began as a temporary wartime measure to protect the morals of soldiers and to save grain. The Selective Service Act forbade the sale of liquor to men in uniform and in August 1917, the Lever Food and Fuel Control Act forbade the use of foodstuffs to distill liquor. Prohibition was destined, however, to become a permanent way of life."1 Prohibition as it became known, was first introduced, however, as part of the 18th Amendment to the constitution, in December 1917. This gave state governments the power to choose to introduce prohibition within their state; prohibition gradually became popular across the USA and by this time 26 states were dry and more than half of the population lived in an area of effective prohibition. The 18th Amendment was followed up by the Volstead Act of 1919 which classified all drinks containing 0.5% alcohol as liquor and appointed penalties to be given in cases of someone breaking the prohibition laws. By the time of the Volstead Act three quarters of the states of the US had accepted prohibition. The first Prohibition Commissioner, John F. Kramer was confident the policy would prove to be successful, he stated, "The law will be obeyed in cities, large and small, and in villages, and where it is not obeyed, it will be enforced.... The law says that liquor to be used as a beverage must not be manufactured. We shall see that it is not manufactured. Nor sold, nor given away, nor hauled in anything on the surface of the earth or under the earth or in the air." ...read more.

"On average these agents were paid only $2500. As a result it was east to bribe them to prevent prosecution."12 As a result of this, a large amount of illegal activity concerning the prohibition laws went unreported. Prohibition gave way to the arrival of gangsters and organized crime in American society. The gangs took it upon themselves to provide the alcohol to the nation. The gang leaders became excessively wealthy and had a great deal of control over the cities in which they lived and worked. One of the most powerful gangsters in Chicago, during prohibition was Al Capone, he was a very violent man, he made millions from speakeasies, and he did this at the same time as appearing with the mayor and politicians at charity events, in which he often donated. Al Capone claimed what he was doing was what the American people wanted, he wasn't doing it merely for the profit; he said "If people didn't want beer and wouldn't drink it, a fellow would be crazy for going around trying to sell it. I've seen gambling houses too... and I never saw anyone point a gun at a man and make him go in... I've always regarded it as a public benefaction if people were given decent liquor and square (honest) games."13 Because of the nature of the gangs the police were helpless, they were often paid by the gangs and also at fear of being killed, as a result of the increase in gangs there were many murders. The gangs and gangsters made it very hard for the police to enforce the law of prohibition, or infact any law at all, this meant that although prohibition was in place there was not really anyway for the police to ensure this was obeyed, and suggesting prohibition was failing. There was a major general increase in crime rates during the 1920's, not only in organized crime, but in many other areas too. ...read more.