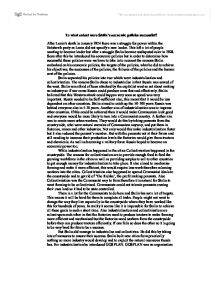 To what extent were Stalins economic policies successful?

To what extent were Stalin's economic policies successful? After Lenin's death in January 1924 there was a struggle for power within the Bolshevik party as Lenin did not specify a new leader. This left a lot of people wanting to become leader but after a struggle Stalin became undisputed ruler in 1928. Soon after this he introduced his economic policies but in order to determine how successful these policies were we have to take in to account the reasons Stalin embarked on his economic policies, the targets of the policies, what he did to achieve his objectives, the successes of the policies, the failures of the policies and the human cost of the policies. Stalin separated his policies into two which were industrialisation and collectivisation. The reasons Stalin chose to industrialise is that Russia was scared of the west. Stalin was afraid of been attacked by the capitalist west so set about making an industry so if war came Russia could produce arms fast and effectively. Stalin believed that this Western attack could happen very soon so speed was very important. Russia needed to be Self-sufficient also; this meant that it would be less dependant on other countries. Stalin aimed to catch up the 50-100 years Russia was behind everyone else in 5-10 years. ...read more.

There were two five year plans which were completed and also a third which had to be stopped. The 5 Year Plans basically set targets and helped people to realise what they were aiming for. In the countryside in order for Collectivisation to take place the State took direct control of agriculture and collectivised it. This meant that the peasants would put their lands together to form larger joint farms but they could also keep small plots for personal use. Animals and tools were also pooled together and the farms would be run by committees. Also the MTS (Motor Tractor Service) were provided by the communists to make tractors available and make farming easier. The Kolkhoz (collectivised farms) would produce 90% of their crop for the state who would then share out the profits and 10% to feed the peasants. Many peasants refused to collectives so party officials were sent out to the countryside that was called the 25,000ers (this was because there were 25,000 sent out) and forced those peasants who refused to collectivise. The officials were helped by the red army and the secret police. The main group of peasants to rebel were the Kulaks, the more prosperous peasants, and they simply refused to hand over anything and refused to becoming workers of the state so 'De-Kulakerisation' took place. ...read more.

Consumer goods were scarce and of poor quality. The working conditions on the large construction projects were appalling with many deaths and accidents. The workers were always working in dangerous conditions. Wages were also an issue. Wages fell between 1928 to 1937. Food was extremely basic also with just grain and crop being supplied. Strict discipline was also introduced in the factories which in most cases meant not many breaks and a lot of work. In the countryside over 13 million peasants died from famine, a lot of which came from the Ukraine. Also the almost all of the Kulaks were killed or sent off to labour camps where they were tortured and made to work for many hours on end. Many of the rebellious peasants were tortured or killed also. In conclusion I would say that Stalin's economic policies were a success. They achieved their main aim which was to win the next war which they did against Germany in World War 2. Stalin created a super power out a laughing stock in 10 years. But with some many people dying it is hard to call the whole thing a success. I would call Collectivisation a success and a failure as Russia managed to produce more grain than before but 13 million people died from a man made famine which is a terrible amount. Industrialisation I would call a success as Russia was now an industrial super power and it involved far less deaths than Collectivisation. ...read more.