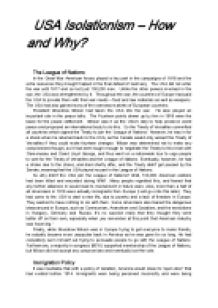 USA Isolationism - How and Why?

﻿USA Isolationism ? How and Why? The League of Nations In the Great War American forces played a key part in the campaigns of 1918 and the extra resources they brought helped in the final defeat of Germany. The USA did not enter the war until 1917 and so lost just 100,000 men. Unlike the other powers involved in the war, the USA was strengthened by it. Throughout the war, the countries of Europe had paid the USA to provide them with their war needs ? food and raw materials as well as weapons. The USA had also gained many of the overseas markets of European countries. President Woodrow Wilson had taken the USA into the war. He also played an important role in the peace talks. The Fourteen points drawn up by him in 1918 were the basis for the peace settlement. Wilson saw it as the USA?s duty to help preserve world peace and proposed an international body to do this. So the Treaty of Versailles committed all countries which signed the Treaty to join the ?League of Nations.? However, he was in for a shock when he ...read more.

He had completely worn himself out trying to persuade people to go with the League of Nations. Furthermore, a majority in congress (80%!) supported membership of the League of Nations, but Wilson did not accept any compromises and eventually lost the vote. Immigration Policy It was inevitable that with a policy of Isolation, America would close its ?open door? that had existed before 1914. Immigrants were being perceived incorrectly and were being labelled with a variety of defamatory and unfair brandings. They were thought by common Americans to be: 1. Dirty and almost all poverty stricken 2. Uneducated and focused on crime and corruption 3. Mostly communists and spies from Eastern Europe 4. Immigrants brought cheap labour and lowered the wages of average Americans 5. Anti-democratic and not particularly loyal 6. And itching for a revolution like what had happened in Russia in October 1917. In this sense they alleged to be bringing with them Communism, anarchy and the destruction of existing democracy in the USA. Such feelings could not have been possible without a heightened sense of nationalism and patriotism. ...read more.

It was a tariff policy designed to protect American industry and output. It placed high taxes on all foreign imports in order to promote the purchase of American goods in America by Americas against any foreign goods. Europeans responded with their own high tariffs on American exports. Separating industry reduced America awareness of others as an economic market. The act gave the president power to raise or lower the rate as was thought necessary. Of the thirty-seven times that the rate was varied, President Harding and President Coolidge raised it 32 times. As a matter of actual practice, most of the Republican presidents of the 1920s predictably ignored recommendations to lower tariff rates, but regularly offered protection to American producers by raising rates when given the opportunity. The impact of the Fordney-McCumber Act was considerable. Rising tariff barriers in the U.S. made it more difficult for European nations to conduct trade and, resultantly, to pay off their war debts. Further, the protective shield against foreign competition enabled the growth of monopolies in many American industries. Predictably, other nations resented the American policy, protested without result, and eventually resorted to raising their own tariff rates against American-made goods, thus creating a significant decline in international trade. ...read more.