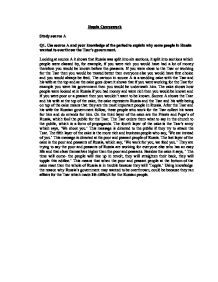 Use source A and your knowledge of the period to explain why some people in Russia wanted to overthrow the Tsar's government.

Anti Bolshevik protesters spread across the country.' However source E is more factual because it was written for a history school textbook which means that it would be more reliable comparing to source D which is full of negative points about the Bolsheviks. Source D is not as reliable as source E because as you can read the source is full of negative comments about the Bolsheviks and also it is written from an opposition point of view. We can say this because the way the writer describes the Bolsheviks for example he refers to them as, ' Dangerous enemies.' Source D can be known as a propaganda source where as source E which is written between 1995-1996 was an hindsight source which meant that the person who wrote the source looked back at what happened and then writes what happened by gaining all the information possible. Looking at the time of what the sources talk about and using knowledge, the Bolsheviks did promise bread, peace and land which both sources talk about. We also know that the Bolsheviks did not accept that the people had voted for the Socialist Revolutionary and that the Bolsheviks overthrow them and took power. We know that the Bolsheviks are violent as they did use violence to resort their problems on January 18th 1918. They wounded hundred people one hundred who demonstrated both sources says that the Bolsheviks were either 'Fierce' or 'Dangerous.' Source E partly agrees with some of source D's facts this is clearly because source D is written from a Socialist Revolutionary point of view which at the time may be written out of hatred where as source E had more facts of what was really happening ...read more.

know that things did start to improve over the years but we do not know about taxes and inflation, however source J is trying to prove that the conversation between the villagers is saying that the people in charge get everything for example the government who collect tax they get what they want and that the people of Russia have no say. Study sources L and M Q8. How do these two sources differ in their view of the Bolshevik government? The two source L and M do differ in a few ways. Source L talks about the Bolsheviks bad points for example, 'they believed in dictatorship, in the use of terror wherever the party's power was thought to be threatened.' However source M talks about the Bolsheviks good side for example, 'The new laws emphasised the full equality of men and women.' Both sources are biased to one view, which they think is right. Source L is bias because the historian that wrote the extract thinks only bad of the Bolsheviks he or she might have had a grudge against them whereas source M talks about how perfect the Bolsheviks made Russia and the improvements they made helped everyone. The two sources have total opposite views we could say that is a place where the two sources differ in the views as well as the information they both give. Source L is trying to say that the Bolsheviks is trying to take control using knowledge one could say that is true because in the election when the Bolsheviks had lost to the Socialist Revolutionary they had not accepted the public's view and take control. Both sources are very factual and are true about the Bolsheviks. ...read more.