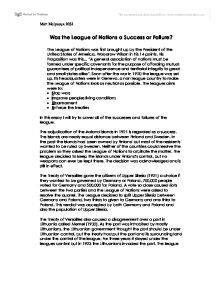 Was the League of Nations a Success or Failure?

Was the League of Nations a Success or Failure? The League of Nations was first brought up by the President of the United States of America, Woodrow Wilson in his 14 points. His Proposition was this... "A general association of nations must be formed under specific covenants for the purpose of affording mutual guarantees of political independence and territorial integrity to great and small states alike". Soon after the war in 1920 the league was set up. Its headquarters were in Geneva, a non league country to make the League of Nations look as neutral as possible. The leagues aims were to: * Stop wars * Improve peoples living conditions * Disarmament * Enforce the treaties In this essay I will try to cover all of the successes and failures of the league. The adjudication of the Aaland Islands in 1921 is regarded as a success. The islands are nearly equal distance between Finland and Sweden. In the past the islands had been owned by Finland but most of the residents wanted to be ruled by Sweden. Neither of the countries could resolve the problem so they asked the League of Nations to arbitrate the matter. The league decided to keep the islands under Finland's control, but no weapons can ever be kept there. ...read more.

Neither country argued with the decision. Economic collapse in Austria and Hungary (1922-3) after the war, Austria and Hungary's economies were disintegrating, and with the trouble of reparations it seemed they would simply collapse. The League arranged loans for the two countries and in effect, took over the economic control of the two countries. With this help, both Austria and Hungary were able to begin economic recovery. The League's action was quick and effective. The border between Albania and Yugoslavia was dispute and Yugoslavian military were in some Albanian territory. After clashes with Albanian tribesmen, the Yugoslav forces invaded more. The League sent a commission to the region. The commission supported Albania and the Yugoslav forces drew back in 1921. War was again avoided. The individual departments of the League were a success as they targeted some of the issues all over the world. Such as slavery they attacked slave traders in Sierra Leone and Burma. They also addressed the issue of drug trafficking and closed down drug companies. Also the Court of International Justice worked because the fifteen judges settled many disputes. Additionally the Mandates Commission supervised the territories and made sure they were well governed. Furthermore the International Labour Organisation changed the maximum working hours in a day/week. ...read more.

Whilst travelling to the area, the Italian members of the survey team became separated from the rest. The five Italians were shot by gunmen who had been in hiding. Italy thought Greece were behind the incident and ordered Greece to pay a fine. Greece refused to pay up. Italy's reaction was to bombard the Greek island of Corfu. Greece asked the League for help but Italy, under the leadership of Benito Mussolini persuaded the League to fine Greece 50 million lire. The Ruhr in 1923, this dispute was about the fact that Germany couldn't pay her reparations instead of going to the League, France marched into the Ruhr. Even though France had clearly broken the Leagues rules. The League could not take action against France because to be able to take action against one of the major powers. It needed the backing of its two main members, Britain and France and because the inner core of the league was involved in the dispute, it could not be decisive. In conclusion I think the League of Nations had the right idea but as Benito Mussolini quoted "The League is very well when sparrows shout, but no good at all when eagles fall out". Meaning that the league could settle minor disputes between small countries but when it came to the major powers e.g. Italy, France, it did not have the authority to take any action. ?? ?? ?? ?? Matt Molyneux 10S1 ...read more.