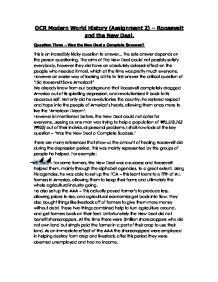 Was The New Deal a Complete Success

OCR Modern World History (Assignment 2) - Roosevelt and the New Deal. Question Three - Was the New Deal a Complete Success? This is an incredibly tricky question to answer... The sole answer depends on the person questioning. The aims of The New Deal could not possibly satisfy everybody, however they did have an absolutely colossal effect on the people who needed it most, which at the time was pretty much everyone. However an easier way of looking at it is to first answer the critical question of 'Did Roosevelt Save America?' We already know from our background that Roosevelt completely dragged America out of its spiralling depression, and revolutionised it back to its decorous self. Not only did he revolutionise the country, he restored respect and hope into the people of America's hearts, allowing them once more to live the 'American Dream'. However is i mentioned before, the New Deal could not cater for everyone...seeing as one man was trying to help a population of 125,578,763 (1933) out of their individual personal problems. I shall now look at the key question - 'Was the New Deal a Complete Success.' ...read more.

It also helped to find a common ground with Tribal governments. The reversal of the previous Dawes Act of 1887 meant that tribes could now own and make decisions about land. The Indian Reservation Act in the same year also gave Native Americans the right to supervise their own affairs, like creation of magistrates of law and allowed them to freely follow their own beliefs and cultural conduct. Another success the New Deal achieved was social security. All be it in the second bout of the program, it allowed benefits to help the old, sick and unemployed. It greatly benefited people as they no more had to save all their money for old age. At the age of 65 Roosevelt deemed it just to give a state pension to that person. He also gave help to the handicapped, and single or married women with dependant offspring. He also created the Wagner Act, supporting workers who wanted to join unions and prevent employers from sacking workers who were in that union. Trade unions grew in power, meaning more employer-employee communication. A final contributing factor which reeled in the success of the program was the security of American finance. ...read more.

actually prevented industrial recovery by allowing for resistance in strikes. Another argument is that 1937 saw the rise of the 'New Depression' where unemployment again rose, trade rates fell and the world arms race and isolationist policies before war saw a world trade slump, perhaps suggesting that the New Deal was not quite strong enough. However some could say that it was an extremely powerful bill, which saved democracy, provided lots of jobs, homes and one almighty morale boost- something which was much needed at the time, increasing hope and happiness for America. It also created the Social Security Act, securing the American public of a prosperous retirement and allowed them to not worry about falling ill or having an accident. These points helped to return America to the golden land of chance that it had once been. In my personal view, i think that there is some truth in the statement 'The New Deal was not a complete success' because it did not reach out to EVERYONE who needed help, for example only a fifth of farmers received loans to keep their farms, and only a million people were affected by the HOLC. However, I do think the New Deal was incredibly effective to most citizens, and really did help America build its charming character back up again, both socially and economically. ?? ?? ?? ?? ...read more.