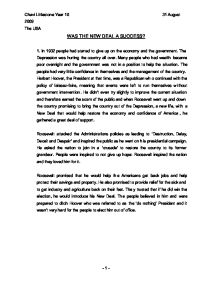 Was The New Deal a Succes

WAS THE NEW DEAL A SUCCESS? 1. In 1932 people had started to give up on the economy and the government. The Depression was hurting the country all over. Many people who had wealth became poor overnight and the government was not in a position to help the situation. The people had very little confidence in themselves and the management of the country. Herbert Hoover, the President at that time, was a Republican who continued with the policy of laissez-faire, meaning that events were left to run themselves without government intervention. He didn't even try slightly to improve the current situation and therefore earned the scorn of the public and when Roosevelt went up and down the country promising to bring the country out of the Depression, a new life, with a New Deal that would help restore the economy and confidence of America, he gathered a great deal of support. Roosevelt attacked the Administrations policies as leading to 'Destruction, Delay, Deceit and Despair' and inspired the public as he went on his presidential campaign. He asked the nation to join in a 'crusade' to restore the country to its former grandeur. People were inspired to not give up hope: Roosevelt inspired the nation and they loved him for it. Roosevelt promised that he would help the Americans get back jobs and help protect their savings and property. He also promised to provide relief for the sick and to get industry and agriculture back on their feet. ...read more.

Herbert Hoover is depicted as a man walking away studying a timetable this is mocking him saying that he followed the normal and what was set rather than Roosevelt who initiated laws etc.. Hoover is holding a gladstone bag to signify that the cartoonist thinks that Hoover's policies were empty and he was a poor salesman. Roosevelt's rolled up sleeves are drawn to show that he means business and is prepared to take action himself. Source F is also pro-Roosevelt. First the cartoon shows Uncle Sam, representing American society, looking haggard and ill, sitting there in his pyjamas listening in to the 'nurse and the doctor'. The nurse, being Congress, is listening to the 'doctor' very carefully. Doctor Roosevelt is prescribing the medicines. This represents Roosevelt 'prescribing' all his different 'organizations' for the country to 'get back on its feet'. What the 'doctor' is saying that if the New Deal doesn't work (which there is no reason why it shouldn't) then something else will have to be prescribed to get America back on its feet. 4. Source H is more informative than Source G because Source G is just informing us about one old couple who were very grateful to Roosevelt for helping them, but popular song is made up to reflects what the public thinks or may be made to think to speak endearingly of the Democratic party, the song uses slang such as 'Martin' and 'donkey' which also reflects the public mood. The song also compares life under Roosevelt and life during the Depression where they were 'neglected'. ...read more.

Source C and D shows how people are dependant on the administrations and accuse them of naively giving their money to New Deal even though it wasn't working and was just sucking them dry. Sources E and F show that the New Deal was working and that Roosevelt was doing something unlike Hoover. Sources G and H praise the New Deal, there isn't one word which criticizes him in either. Source I is a criticism from a self-made man who believed that if he could pull himself up so should everyone. Source J was written by someone knew him well and admired and his principles and who helped him succeed. Even though Source I says that the New Deal helped people lose confidence in themselves, Interpretation 1 contradicts it and says that the New Deal actually gave people more confidence in themselves. Interpretation 2 is mostly seen in Source C and D where they show that the economy worsened and that Roosevelt was pumping away at the New Deal. Interpretation 1 is a stronger statement than Interpretation 2 as Interpretation 1 has more sources to defend its argument. The actual interpretation doesn't have so many facts but if we look for arguments for the New Deal then we would find more to defend it than we would to criticize it. On balance, balance it may be seen that where there was more positive reaction to the New Deal than negative. Perhaps Roosevelt's success was brought about by a combination of New Deal policies and US entry into the Second World War. ?? ?? ?? ?? Chavi Littlestone Year 10 31 August 2009 The USA - 1 - ...read more.